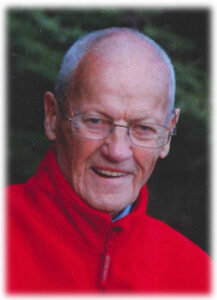 It is with great sorrow that the family of John Alsop announces his passing at the age of 89 years. He will be lovingly remembered by his children: Karen Damen (Andy), Ken Alsop, Kiffy McNabb, Tim Alsop, Kirk Alsop, and Bruce Alsop; his grandchildren: Susan, Peter, and David Damen, Butch and Dickie McNabb, Lindsay Alsop and Kaja Alsop; his great grandchildren: Lara, Sam, Ellie, Finn and Hope Damen; his sister Kae Windsor of Manitoba; as well as numerous extended family and good friends. He was predeceased by his wife of nearly 59 years, Neta; his son-in-law Dick as well as his parents and siblings. John was born and raised in Manitoba but moved to British Columbia to provide better opportunities for his family. As a young man he served his country and in his spare time enjoyed sports, hunting and farming. He loved gardening and supplied his neighbors with the bounty of his garden. He also enjoyed doing anything where he could work with his hands. He was a mason for 63 years and retired from the Abbotsford School District after 15 years. In the last year of his life, he was a resident of Calgary. Dad was a compassionate, humble man who helped anyone in need. He was a devoted family man who will be greatly missed by many long term friends. At John’s request, a private family service will be held in British Columbia at a later date. In lieu of flowers, donations may be made to the Veterans Association or the Masonic Lodge.