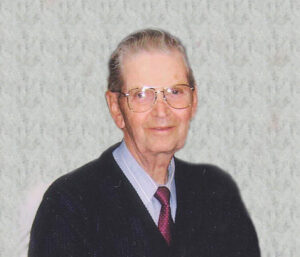 With sadness we bid farewell to our dear father, Jim Mabley, who passed to his rest in Jesus on November 7, 2013 at 88 years of age. Jim was born and raised on the family farm near Calgary. Farming became his lifelong passion and occupation. In his teens, Jim met the love of his life, Viola Kaiser. Married in their early twenties, they were blessed with seven children and 62 years of marriage. We look forward to reuniting with him in God’s Kingdom. Jim is survived by brothers Horace, Lonnie, and Gerald; his children Linda (Wayne) Niblow, Tom (Jane) Mabley, Bev (Wayne) Bond, Rodger Mabley, Janice (Richard) Sell and Greg Mabley; eighteen grandchildren; seventeen great-grandchildren; and many more family and friends. He was predeceased by his wife Viola; sister’s June, Erma, and Sandra; son Barry Mabley; daughter-in-law Jackie Mabley; grandson John Sudds; great grandson Brayden Graham. Funeral Service will be held at Calgary Central Seventh-day Adventist Church (1920 – 13 Avenue NW) on Friday, November 15, 2013 at 11:00 am. Interment will follow at Rocky View Garden of Peace Cemetery. If friends so desire, donations may be made to the Adventist Development and Relief Agency (ADRA), www.adra.ca.