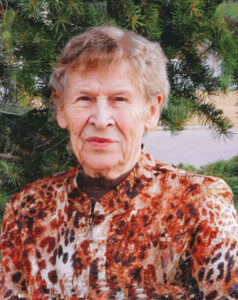 MARTY, Jessie March 29, l926 South Shields, England, February 1, 2015 Calgary , Alberta. Jessie Marty (nee Smith) passed away peacefully at the Peter Lougheed Santuari Hospice after a brave struggle with declining health. She was predeceased by her husband Orland Marty of 58 years in 2002. She is survived by her sons Sid Marty (Myrna), Glenn Marty (Bonnie) her daughter Sharon (Andy) five grandsons, one granddaughter and six great grandchildren. Jessie was a red-haired Geordie lass who caught Orland’s eye at a Calgary Highlander’s dance in WW II England. She was one of the plucky British war brides who followed their husbands across the seas to a land they knew little of and a future they could only imagine. Life was not always easy in the new country, but for Jessie, family was a great joy and consolation as the years went by. The family wish to express their gratitude to the dedicated and compassionate staff at the Peter Lougheed Hospital and in particular to the wonderful nurses and doctors at the Lougheed Santuari Hospice. For those wishing to pay their respects, a visitation will be held at Pierson’s Funeral Service ( 4121 – 17 Avenue S.E.), on Friday, February 6, 2015 from 7:00pm – 9:00pm. Interment at Queen’s Park Cemetery prior to service.Funeral Service will be held at Pierson’s Funeral Service on Saturday, February 7, 2015 at 1:00pm. In lieu of flowers, donations may be made in Jessie’s name directly to the Alberta Lung Association