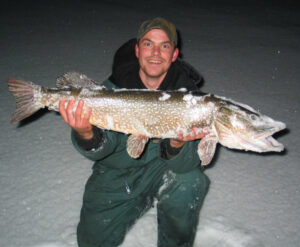 It is with heavy hearts that we announce the sudden death of Jed McCaig on Fri. Nov. 27th, 2015, age 33. Born in Calgary on Jan. 12th, 1982. Jed grew up in Ogden & graduated from Lord Shaughnessy High School. Jed studied to be an electrician at SAIT for two years. Predeceased by; his Grandfather – Grenville McCaig of Didsbury, AB on Aug. 30th, 1980 & his Nana – Gertrude (Gertie) Stewart of Evansburg, AB (formerly of Arrowwood/Calgary/PEI) on August 5th, 2015. Jed is survived by; his parents Bruce & Helen McCaig of Sorrento, BC., his sister April Stokes and her husband Kirk of Calgary, his grandmother, Dorothy McCaig of Sorrento, BC (formerly of Didsbury/Olds, AB) & Pop – Forrest (Bush) Stewart of Entwistle, AB (formerly of Barons/Calgary/PEI) & his loving girlfriend Anjela (Anj). Jed loved the great outdoors & all it had to offer. Most of his younger birthday parties were while ice fishing. From a very young age he was an excellent shot & a great hunter. He was a handy man and could fix almost anything, much like his father Bruce. He was well versed on a broad variety of heavy equipment and could operate most pieces of machinery. As per Jed’s wishes there will be no service. In Jed`s memory you can donate to your choice of; Crohn’s & Colitis Canada (www.crohnsandcolitis.ca), the Organization for Bipolar Affective Disorder (www.obad.ca) or Stars (www.stars.ca).