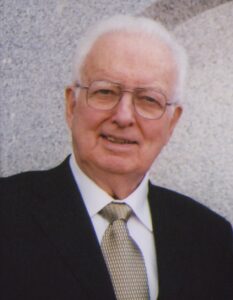 Born April 9, 1927, in Lethbridge, Alberta, Jay Dahl Salmon was the first of three children born to John Ross and Eva Dahl Salmon. He spent his early years in Raymond and then moved to Picture Butte where his father was employed with Canadian Sugar Factories. Jays days were filled with school, playing with his cousins and good friends, taking care of chickens, riding his horse and completing the chores of a boy growing up during the depression. Scouting was important, and Jay achieved the honour of becoming a King Scout. After graduation from Picture Butte High School in 1945 Jay entered the University of Alberta in Edmonton, Alberta where he met his future wife, Doris Anne Weinheimer in October 1946. Jay served a mission for The Church of Jesus Christ of Latter-day Saints in Australia, from 1948 to 1950, and shared his testimony of the restored gospel with others. Jay married his sweetheart on July 18, 1951 in the Cardston LDS temple. After graduating with a law degree from the University of Alberta in 1954 and articling in Edmonton for a year he moved to Calgary with his young family. He practiced law in Calgary for many years serving as City Solicitor for the City of Calgary for part of that time. He served in many capacities in his Church – in the Young Men’s program, in the Sunday School and in priesthood leadership. He served in many assignments including scoutmaster, Sunday school teacher, high councillor, bishop, and as a member of the stake presidency for the Calgary North Stake. Jay served as an early morning seminary teacher helping his class view their lives and the choices they would make with an eternal perspective. “Let’s look at this with an eternal perspective” was an oft-used comment by Jay. Jay passed from this life on Sunday, September 30, 2018 at the age of 91 with Doris, his beloved wife of 67 years, by his side. He is survived by his younger sister and husband Delores (Robert) Hague of Yakima, Washington and younger brother and wife Don (Joyce) Salmon of Edmonton, Alberta. He is missed by his loving wife, Doris, and his 8 children, David (Linda Christensen) Salmon, Ross (Karen Palmer) Salmon, Bruce (Lori Newton) Salmon, Mark (Loraine Beverton) Salmon, Diane (Konrad) Lee, Carol Salmon, Laurel (Nicolas) Ruiz and Linda (Chris) Blaszczyk, along with 41 grandchildren, and 113 great-grandchildren. The family would like to acknowledge with grateful thanks those who have cared for Jay and Doris while they have lived at St. Marguerite Manor. Their tenderness and loving concern are much appreciated. A viewing will be held for Jay at The Church of Jesus Christ of Latter-day Saints – Bow Valley Chapel (2526 24th Avenue NW, Calgary) on Thursday, October 11, 2018 from 6:00 – 8:00 pm. A Funeral Service will be held for Jay at the same location on Friday, October 12, 2018 at 11:00 am preceded by a viewing from 9:30 – 10:45 am. The Graveside Service will be held in Temple Hill Cemetery (Raymond, Alberta) on Saturday, October 13, 2018 at 11:30 am.