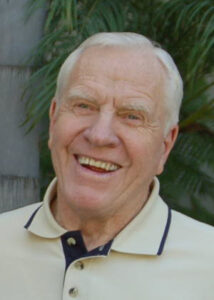 James “Jim” William Cooper passed away peacefully in Calgary, Alberta on Saturday, November 26, 2016, at the age of 83 years. He was preceded in death by his beloved wife Montez (Henderson), and will be greatly missed by their children Marla Wagner (Edward) of Baltimore, MD, Kendall (Christine) of Wesley Chapel, FL, Brad (Teri) of Dove Canyon, CA, and Todd (Nancy) of Calgary, AB; 17 grandchildren; nine great grandchildren; and many other dear relatives and friends. Jim was the youngest of six children born to William and Della (Brown) Cooper in Cardston, Alberta. He was a student at Brigham Young University when he met his sweetheart Montez and the two were married in 1953 in the Cardston, Alberta Temple of the Church of Jesus Christ of Latter-day Saints. Jim told all that ‘Tez was the “love of my life,” and Montez often remarked that their life adventure was “beyond my greatest dreams.” Jim’s greatest desire was to be together with Montez and his children as an eternal family. Jim and Montez began their life together in Cardston where Jim worked with his father and brother in the family trucking business, Cooper Transport. In 1957, the young family moved to Calgary where Jim founded his own trucking company which merged with two others in 1964 to form an international carrier, Tri-Line Freight Systems, where Jim served as president and CEO until the company was acquired in 1989. Jim devoted his life to serving family, church and community. His most cherished times were with his family and his dearest Tez. Always active, Jim loved adventure, traveling, snow and water skiing, fishing, horseback riding and spending time with family at Shuswap Lake in British Columbia. He also loved being a private pilot and flew regularly, making trips all throughout Canada, the United States and Mexico. The Cooper family is grateful for the abundant love and support Jim received in his final years from family, friends, and church members. Relatives and friends are invited to a Visitation for Jim at The Church of Jesus Christ of Latter-day Saints – Sundance Chapel, 100 Sunpark Drive SE on Friday December 2, from 7-8:30 p.m. A Funeral Service will then be held at the same location on Saturday, December 3, at 10:30 a.m. with visitation starting at 9:00 am. Interment will follow at the Okotoks Cemetery, 30 Westland Street. In lieu of flowers, the Cooper family requests that contributions be made to The Humanitarian Aid Fund of The Church of Jesus Christ of Latter-day Saints at give.lds.org/humanitarian. If you wish the family to receive an acknowledgement, please include the name, address and your relationship to Jim.