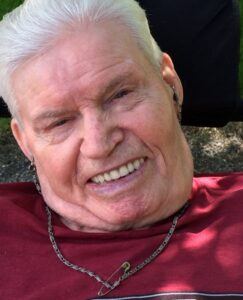 James Martin passed away peacefully on Sunday, May 26, 2019 at the age of 96. He was born August 25, 1922 on the family farm North East of Ituna, SK, the 7th of 13 children born to William Beers and Rachel (Hill) Martin. Jim married Rhoda Farthing in 1953. They had 3 children and 43 happy years before she passed away in 1995. He married Thelma Brower Ridley later that year. For the next decade she blessed our family with love and good humour. She passed away in 2006. Jim was an active member of The Church of Jesus Christ of Latter-day Saints, serving in many different capacities. He made his living as a pressure welder and was a member of the International Brotherhood of Boilermakers, Ironship Builders, Blacksmiths, Forgers, and Helpers, Local 146. In his retirement he enjoyed playing hockey with the 70 Plus Oldtimers Hockey Association and softball with the Calgary Senior Men’s Slo-Pitch 55+. Jim is survived by his 3 children: Terry (Elaine) Martin of San Antonio, Texas, Mike (Bonita) Martin of Carstairs, Alberta and Patti (Darwin) Hawryluk of Calgary, Alberta; 18 grandchildren; 28 great-grandchildren; and his sister, Rachel Thompson; other family members including brother-in-law, Bob (Shirley) Farthing and sisters-in-law Verna Martin, Joan Mitchell, and Elsie (Jack) Eyre; numerous nieces and nephews as well as members of the Ridley family. Upon his passing, Jim was met by his parents; brothers Dave (Eva), Bill, Sam (Rose), Coby (Laura), Fred (Mae), Ray, and Boy; and sisters Susie (Dutch) Lay, Ciss (Ken) McRae, Mary (Arnold) Erickson, and Jean (Walter) Sawchuk, sister-in-law Anna Farthing, and brothers-in-law Maurice Farthing and Clary Mitchell, along with his daughter-in-law Edith Martin, grandson Wade Martin, and other family members. The family expresses special thanks to the staff of Bethany Care Centre Calgary (2 South) for their thoughtful and kind attention to Dad’s needs. A viewing will be held at Pierson’s Funeral Chapel (4121 17th Ave SE) on Thursday, May 30, 2019 from 7:00 pm to 9:00 pm. A Funeral Service will be held for Jim at The Church of Jesus Christ of Latter-day Saints (7017 California Blvd NE) on Friday, May 31, 2019 at 11:00 am.

In lieu of flowers or other donations, please gather your family together and go out for ice cream. Tell some corny jokes, laugh a lot and enjoy each others company. Dad would appreciate it.