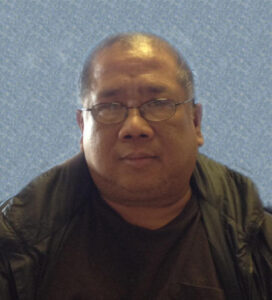 It is with great sorrow that we announce the sudden passing of Jaime Perez, a caring husband, a loving father, a generous uncle, and true friend. He was the youngest son of Vivinceo and Cepherina Perez. He was born in Manila, Philippines on June 4th, 1957. He came to Canada with his parents in 1977 to Montreal, and then later migrated to Calgary where he started his family and made it his home. Jaime was known as a fun loving man; he had a kind and generous heart, also a great friend for many people, and could put a smile on those he just met. He will always be known for being a hard worker, as he often worked two jobs day and night. One of his greatest achievements was working at CP Rail for over 25 years where he became a heavy duty machinist. He also worked as a taxi driver for more than 10 years. Above all else Jaime’s legacy will be the love he had and showed to his family, especially for his two children Alex and Jade. Jimmy we love you and we will always miss you. You will forever be in our hearts. Thank you for being who you were, as you were one of a kind. You always had sound advice for us, and exemplified strength and endurance. We will miss your smile and laughter as it would bring happiness to us all. We are sad that you have left us, but find some solace in knowing that you found God in your life, and now you have peace and joy that you always truly deserved. Jimmy leaves behind his kind wife Clara, his two children Alex and Jade, and the mother of his kids Delia. Also, his brothers and sisters Adore, Ernesto, Aurora, Melly, and Romeo (deceased), Daniel, Norma, and Perlito. Not to mention his numerous nephews, nieces, and grandchildren. If you would like to pay your final respect to Jaime there will be a public viewing at Pierson’s Funeral Home, 4121-17ave SE, on Sunday December 29th, 2013 from 6:00-9:00pm, and a final service will be held Monday December 30th, 2013 also at Pierson’s from 10:00am- 12:00pm, with Father Marino Infante officiating. For inquiries or donations please call Jade [email protected] 403-831-9971 or email at [email protected] .