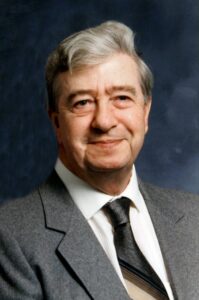 Jack Budge passed away on Tuesday, December 25, 2018 at the age of 88 years. He was predeceased by the love of his life Doreen, in 1967. He will be lovingly remembered by his children, Mark (Debbie) Budge, Philip (Susan) Budge and Gillian (Baxter) Lee; grandchildren, Matthew, Jessica and Amanda; great grandson Jaiden; and many more family and friends. Jack was born and raised in England. He served a term in the Royal Air Force after which, in 1955, he married his sweetheart Doreen. In 1957 they emigrated to Canada where they were blessed with three children. During Jack’s working years he was a master Mouldmaker. In 1988 he followed his grown children to Alberta. He was hard working and loved his family dearly. His wisdom, quick wit, and sense of humour made him memorable and well liked by all who met him. He loved being a dad and spent all of his time with his family. The family would like to thank all of his friends at Sandstone Lodge and Sheep River House for their many years of friendship and companionship. They made his years in both places enjoyable. Jacks family will be holding a private family service for him and his cremated remains will be taken back to Windsor, ON to be interred with his wife Doreen. If friends so desire, donations may be made in memory of Jack to The Heart and Stroke Foundation (www.heartandstroke.ca).