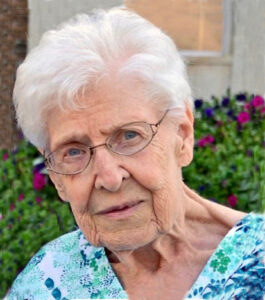 Fay Yost, beloved wife, mother, grandmother and great grandmother passed away peacefully at the age of 89 years with her daughter by her side on Thursday, April 14, 2016. Predeceased by her devoted husband Mickey, Fay is lovingly remembered by her children, Wendy (Don), Alan (Shelley) and Gary (Elinor); grandchildren, Alana (Scott), Wendi, Tyler (Georgia) and Sean-Paul. Fay was the very proud great grandmother of Madison, Celina, Mickey, Cameron, Kairi, Gemma, Kieran, Chase, Hunter and Everleigh. Fay was born in Rosedale (Drumheller) to Bill and Myrtle Skelton. Growing up, she was happiest on the Red Deer River swimming and skating with her siblings Howard, Kay and Vivian. After graduating from high school at the age of 17, Fay started nursing training at Misericordia Hospital in Edmonton. It was in Edmonton where she met and married Mickey and they raised their family. She loved tending her huge vegetable garden and flower beds as well as her dancing dates with Mickey. Fay made extra housekeeping money by dressmaking and knitting beautiful Siwash sweaters. The family spent many happy days at their cabin at Lake Wabamum where Fay enjoyed fishing with Mickey. In 1972, Fay and Mickey moved to Calgary where she later became the head evening nurse at the Brentwood Nursing Home. In retirement, Fay and Mickey traveled extensively to the U.S., the Caribbean and Europe. Predeceased by her parents and siblings, Fay’s happy last years were spent at the Edgemont Retirement Residence where her sister Vivian resided. She made many close friends there and she was especially proud of becoming the “go to person” for the Knitting Club. The family thanks the staff at the Edgemont for ensuring Fay’s comfort and support as well as Dr. Mayhew and the team on Unit 81 at Foothills Hospital where Fay was treated with outstanding compassion and dignity. A Funeral Service will be held for Fay at The Church of Jesus Christ of Latter-day Saints – Forest Lawn Chapel (833 – 44 Street SE, Calgary) on Wednesday, April 20, 2016 at 1:00 pm, with visitation at 12:00 pm. If friends so desire, gifts in Fay’s memory may be made to the Kidney Foundation (www.kidney.ca), the Heart and Stroke Foundation (www.heartandstroke.ca) or a charity of your choice. Messages of condolence may be forwarded to the family at www.piersons.ca.