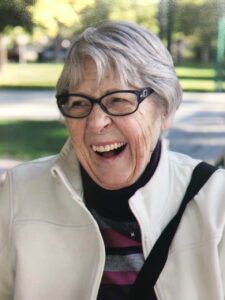 Irene Palmer (nee Johnson) passed away on September 7, 2021 in Calgary at the age of 99 years old- her birthday.

She was born in Barnwell, Alberta on September 7, 1922, the 9th child of 14 children to Benjamin Franklin Johnson and Zella Park Johnson (nee Allred). She had seven sisters and six brothers. Irene had brown eyes like her father and dark hair which pleased her mom. Her mother, Zella, told her that the name Irene came from the Greek goddess of peace. “It influenced my character all my life. I never wanted to fight or quarrel but keep everyone happy and peaceful.” Irene was known to be a kind, smart, loving, generous, talented person all her life.

Irene’s family has a long history of pioneer heritage and membership in the Church of Jesus Christ of Latter-day Saints. One of her earliest memories was traveling to the Cardston Temple where her family was sealed when she was four years old. This temple opened in 1923 and was 74 miles from Barnwell. There were now 10 children in the family with the addition of her brother Cyril, who was a baby. The whole family travelled together by train to Cardston. Folks in Barnwell sewed white clothing for everyone to wear. Once they arrived in Cardston, the family was split up and billeted at with different people overnight before the ceremony the next day. When all the 10 children were brought in for the sealing, the Temple President remarked that it was a record for the Cardston Temple to have so many family members sealed together at once. Irene describes her growing up years on the farm as very happy if not crowded. She learned good work ethics from being raised on a working farm. She loved fresh fruit and vegetables and learned to be an excellent cook and wonderful seamstress.

At age six, Irene started school. She had already learned to read using her sister, Sue’s primer. After that she read everything she could understand. “I preferred to read rather play. Iused to hide with my book in the closet under the stars with a flashlight- read all night in bed. When we went to Lethbridge on Saturday, I would get library books. My ambition was to read everything there. Didn’t make it.” Sue says Irene got out of some working and some trouble by not being around- hiding and reading. Irene was a good student, always got good grades in school and was a lifelong learner.

After high school, Irene went to Calgary and got her teaching certificate from the Normal School. In her early career, she taught everything for grades 1 to 6 in different towns in Alberta. It was after she got her first teaching job that she bought her first set of scriptures. Later she pursued and received her bachelor’s degree from the University of Calgary and taught high school English for several years. In her mid-fifties, she went to Arizona State University in Tempe, Arizona where she got a Master Degree in Library Science. She finished the last years of her career as a school librarian in the Calgary School district.

Irene did have a bit of an adventurous spirit. For a time during WWII, Irene was a riveter on war ships in Victoria. She also loved traveling and went to South America, Europe all over the United States including Hawaii and Alaska. She travelled to England several times in order to work on genealogy. which was another of her passions. She did extensive research on her husband’s ancestry, learning new computer programs, attending seminars and even running the Family History Center for the LDS Church in Calgary for a time. She loved cooking, eating lunch out, sewing, shopping, organizing, painting and several kinds of needle work. But most of all, she loved her family.

Irene is predeceased by her husband, John Palmer, and her daughters, Patricia Unique (nee Cummins) and Madonna Leong (nee Cummins).

Irene’s Funeral will be held at the Church of Jesus Christ of Latter-day Saints- 24th Street Chapel (10923 24th Street S.W., Calgary, AB) on Saturday, September 11, 2021 at 11:00 am with a viewing held prior from 10:00am-10:45am. Those attending the service in person please note masks are mandatory and those wishing to watch from the comfort of your home may do so via a live stream link here.