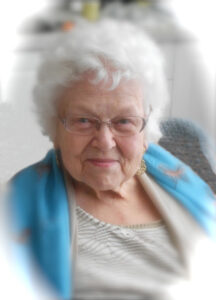 Inger Margreta Bogda, nee Winberg, was born in Chicago to Anna and Werner Winberg on November 12, 1923. Inger was called by God to her eternal home the evening of March 26, 2016 while many of her children sang hymns at her bedside. The entire family rejoices in her release from the suffering of her earthly body to her ultimate healing and peace. Inger’s mother died before she was two years old and she was always grateful for the loving Alvine Family who cared for her for seven years. At the age of nine, she returned to live with her father which created a very close bond between them. In 1947, Werner married Alice Larson who gave Inger stepsiblings Dorothy (Moxley), Larry, and Dalton. Her father’s death in 1959 was a very difficult time for Inger. Inger married Warren Bogda on August 16, 1941 and remained faithfully and happily married for 73 years until Warren’s death in November, 2014. They created a family of nine children: David (Lois); Lois(Jim) Hohnbaum; Carl (Barbara); Paul; Christine (John) Hamilton; Pamela Phillips; Phillip (Laurel); Sarah Auger; and Wayne (Debbie). Inger was extremely proud of her children and delighted with their spouses. Her 23 grandchildren were a huge blessing. Those grandchildren have given her 39 great grandchildren and 2 great-great grandchildren. Warren and Inger moved from Blue Island, Illinois to Calgary, Alberta in 1974 with their four youngest children and were very blessed in the 42 years living there. Son Carl and family were already living in Alberta; daughter Christine and family moved to Alberta in 1992. Inger was preceded in death by her parents, Anna and Werner Winberg; husband, Warren (2014); sister-in-law, Lois Bogda Olson (2014); daughter-in-law, Sharon (1983); brother-in-law, John Olson (1975); stepmother, Alice Winberg; and stepsister, Dorothy Moxley. The Bogda Family is extremely grateful to God for providing us with loving, devoted Christian parents. Inger was a stay-at-home mother for many years while raising her nine children. She became a devoted library volunteer at Salem Lutheran School when the youngest children attended there. After their move to Calgary, she was employed as Secretary at Shepherd King Lutheran church for several years. Inger and Warren moved into an assisted living home, Prince of Peace Manor, in 2006 where she continued her love of library work by developing and maintaining a resident’s library there. Our dear mother loved music and especially to hear the family singing hymns and songs of praise. She loved to sing and play the piano and transmitted that love of music to all her children. She lovingly and willingly served her family in myriad ways, while also imparting a practicality and self-sufficiency to all of us. Mom was a wonderful example of a Proverbs 31 wife and mother. “She is clothed with strength and dignity; she can laugh at the days to come. She speaks with wisdom, and faithful instruction is on her tongue. She watches over the affairs of her household and does not eat the bread of idleness. Her children arise and call her blessed; her husband also, and he praises her; ‘Many women do noble things, but you surpass them all.’ Charm is deceptive, and beauty is fleeting; but a woman who fears the Lord is to be praised.” (Prov. 31:25-30) “Jesus said: ‘I am the resurrection and the life. He who believes in me will live, even though he dies; and whoever lives and believes in me will never die.'” (John 11:25) Memorial service at 11 a.m. Monday, April 11, 2016 at Lutheran Church of the Good Shepherd, 13811 Deer Ridge Drive SE Calgary. Inger requested that any memorial gifts be given to the Concordia Seminaries at Edmonton, Alberta or Fort Wayne, Indiana.