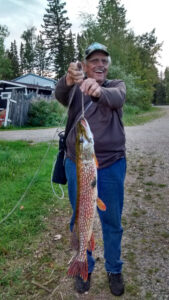 It is with heavy sadden hearts that the family of Howard Thompson announce his passing on Thursday, September 15, 2016 at the age of 69 years. Howard will be lovingly remembered by his wife Jean, his children, grandchildren, brothers and sisters and their spouses, nieces and nephews, and his dear friends. Howard was pre-deceased by his daughter Tammy Lee Thompson; his mother Beulah Thompson and father Samuel Thompson; and his mother-in-law Bernice Perrault and father-in-law William Perrault. Howard was a man that some would refer to as being the salt of the earth. He loved his family, his cottage and his fishing. Howard will be greatly missed by all those who had the absolute pleasure of knowing him. A Celebration of Howard’s life will be held at Pierson’s Forest Lawn Chapel (4121 – 17 Avenue SE, Calgary) on Monday, September 19, 2016 at 2:00 pm. In loo of flowers, donations can be made to The Alberta Heart and Lung Association in Howard’s name.