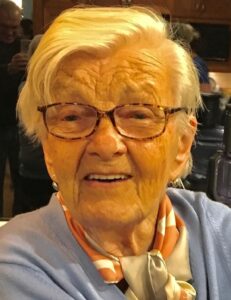 Helen
This is to celebrate the life of Helen Salus, daughter of Josef and Frantiska Opocensky, wife of the late John Salus Sr., mother of John Jr., her first born, Victor, her second, grandmother to Aaron and Jesse, great-grandmother to Oliver and Matthew. She was also affectionately known as â€œBabaâ€ to us all. Born almost a century ago on January 27, 1926, she passed away on January 29, 2020, two days after her 94th birthday.
If, as they say, life is a journey, then Helenâ€™s was quite a trip. It took her from a small town in prewar Czechoslovakia, through war and upheaval to Israel, Italy, France and finally Canada. Her first home in Canada was Montreal, and then, finally, Calgary, where she lived the longest, and where she was happiest.
The quiet, quaint little town of Chrudim was her home for the first two decades of life. From what we know, her early life was happy and idyllic. She lived through the war and German occupation, and while her family was impacted, they survived, but this was not the experience of her future husband, John. His family was wiped out during the Holocaust, which he barely survived. He was repatriated in June 1945. They met through a mutual friend. He proposed. They were married October 10, 1945.
Helen and John started to build a new life, and a new family. Son John Jr. was born in 1947. A year later, history intervened, again. The communists overthrew the democratically elected Czechoslovak government. Having just survived the Nazis, Helen and John were not interested is seeing their newly gained freedom, and future freedom of John Jr. thrown away and left their home and possessions.
On the journey that eventually brought them to Canada in 1951, where they worked hard to build a good life for themselves and their family, that would eventually include second son, Victor. Helen and John were fortunate later in life to be able to return to their place of birth in the Czech Republic for extended visits and to have sons and grandsons come to connect with this part of their heritage. After John Sr. passed away, Helen continued to return to visit friends in her home town of Chrudim and her adventurous spirit led her to travel to other places in Europe.
Throughout her life, Helen epitomized being a survivor. Ever the optimist, Helen was always smiling, and loved visits from family and friends, and people who were not yet friends. Her house was always open, and she loved to feed anyone who crossed her front door. She could be tough minded and determined, but was always happy and welcoming. Helen and John Sr. helped support other waves of Czech immigrants settle in Calgary. She was one of the kindest people you were ever likely to meet. She was very loving about her family and friends.
Generous and forthcoming, Helen also knew how to stretch a dollar. Living through war, revolution, and at times as refugees without a country, this frugality came out of the need to feed and care for her family. She had a penchant for finding bargains, with family often benefiting from her special finds.
Helen was elegant, glamorous, and definitively beautiful in a way that only women in the Sixties could be. She must have looked at pictures of Grace Kelly or Ingrid Bergman, who she looked a bit like, and said to herself â€œyeah, I can do that, but for just a fraction of the costâ€. And she was right. She was always stylishly dressed, and loved cashmere sweaters, with pearls and silk scarves.
And Helen was an amazing cook. She produced fabulous meals, specializing in Czech and fine European cuisine. If visitors arrived unexpectedly, she could look through the fridge and pantry, and whip up a feast in no time. Her pastry skills were legendary. She baked the best apple pies, roulades, and sachertortes you ever ate. It was at Christmas, however, that her baking reached its zenith. She produced staggering quantities of delicious Moons, Bearclaws, and other traditional Czech Christmas cookies. Her family still talks about them in wistful and reverent tones.
Helen was always interested in people and their lives. She could come with up with some very pithy commentary, but she had a very â€œlive and let liveâ€ attitude about most things. But about the important things, the issues that really mattered, she had a very strong sense of right and wrong. â€œThat’s not rightâ€ she would say, wagging her finger, equally vehemently about someone doing wrong, or some greater injustice in the world.
She would always say â€œpast is passÃ©.â€ The past is always there if you look over your shoulder, but always, you must move forward into the future. You can’t change what has happened, and Helen lived long enough and through enough, to have a very full and sometimes tumultuous past. Time and time again she would dust herself off, collect what she needed for the journey ahead and start walking, often to start over again. Her life experiences shaped her, and she passed on her learning to the following generations in her family.
She was much loved and will be missed by all who she touched. The Salus Family would like to thank the wonderful people at Pierson’s Funeral Home for their professional and compassionate handling of Helenâ€™s final arrangements. Our gratitude is also extended to Wentworth Manor and the staff there who provided excellent professional and loving care to Helen during her stay there and especially during her last weeks. In lieu of flowers, donations can be made to Alzheimerâ€™s Society Calgary (https://www.alzheimercalgary.ca/); our family benefited from their services as we provided care to Helen in her later years.