You are here: Obituaries / Helen Hamm 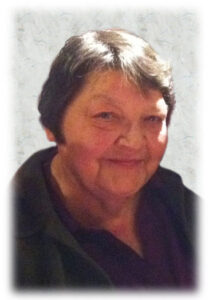 HAMM, Helen (nee Seray) March 10, 1943 February 9, 2012 It is with deep sorrow that the family of Helen Hamm announces her passing at the age of 68 years. She will be greatly missed by her daughters Sherrie (Gary) Grandmont and Robyn Morley; her grandchildren Christopher and Jackson Morley; her sister Eleanor Seray; as well as numerous extended family and friends. She was predeceased by her parents Anne and George Seray; her son Marvin “Sam”; her brother Ivan Seray; and the father of her children, Jim Hamm. Helen was born and raised in Parkerview, Saskatchewan and moved to Winnipeg when she was 18 years old. It was here that she married Jim and they had three children. She enjoyed her work as a cook at Middlechurch Nursing Home for many years. She moved to Calgary in 2002 to be closer to her grandchildren and was an integral part of their life. Funeral Service to be held at Pierson’s Forest Lawn Chapel (4121 17 Ave SE) on Friday, February 17, 2012 at 2:00 pm with cremation to follow. Messages of condolence may be forwarded to the family at www.piersons.ca.