You are here: Obituaries / Harry Newton 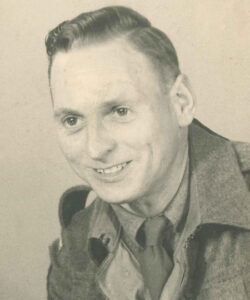 NEWTON, Harry June 4, 1920 April 26, 2012 Harry passed away at the Peter Lougheed Centre at 8:10 pm, with his wife Jean and daughter Noreen at his side, due to old age. He leaves to mourn his wife of 65 years, his daughter and son in law Ray, five grandchildren, eleven great grand children, and eleven nieces and nephews in the United Kingdom. He was predeceased by his two brothers, two sisters and one sister in law. Harry served with the British Army during World War II in England as a radar operator with the search lights around London during the Battle of Britain and in the infantry in the European Theatre of Operations. He helped to liberate some of the death camps in Germany and said it was something he would never forget. He found it very difficult to witness man’s inhumanity to man. He married his dear wife in 1946 and apprenticed as a carpenter after being demobilized. In 1951 the family immigrated to Australia and returned to England six years later. In 1967 the wanderlust returned and the family immigrated to Calgary where he continued in his carpentry until retirement. He was a faithful member of The Church of Jesus Christ of Latter-day Saints. Part of his life’s work was doing his family’s genealogy where he gathered thousands of names of his ancestors. Visitation will be held on Tuesday, May 1, 2012, at Pierson’s Forest Lawn Chapel (4121-17 Avenue SE) from 7:00 to 9:00PM. Funeral Services to be held on Wednesday, May 2, 2012, at The Church of Jesus Christ of Latter-day Saints Calgary 13th Ward (5927 Tipton Road NW) at 1:00 PM. Interment to follow at Mountain View Memorial Gardens. Messages of condolence may be forwarded to the family at www.piersons.ca.