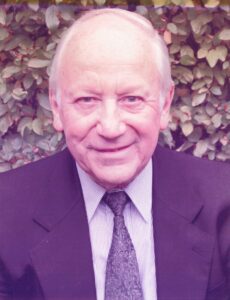 H. David Matthews, M.A. (Cantab.) was born in Romford, England of English and Welsh heritage and died on June 20, 2019. He is survived by his beloved wife, Jean, and many relatives in the U.K., Sweden and Australia.

Following graduation in Geography in June, 1957 at Cambridge, Dave moved to Calgary in July and joined Dome Petroleums Land Department where he remained for 21 years. For the other 14 years of his 35-year career in the petroleum land business, he worked mainly as a consultant and with Canadian Hunter and Gulf Canada.

Dave always believed in a balance between work and other activities and was involved with the Calgary Tennis Club, rugby, rowing, horticulture, the Daylight Saving Society and his community. He was awarded Life Memberships in the Calgary Rowing Club, the Calgary Horticultural Society and Alberta TrailNet.

Parks and pathways were always key interests and Dave was involved with citizens groups which lobbied successfully for the preservation of Fish Creek and Nose Hill as major parks. Dave was particularly pleased to see that Calgarys pathway system has become one of the best in Canada, if not North America. He also wrote freelance gardening articles and, in more recent years, assisted with the effort to rejuvenate the historic Reader Rock Garden.

At Daves request there will be no memorial service or funeral. There will be a private burial at Queens Park Cemetery.