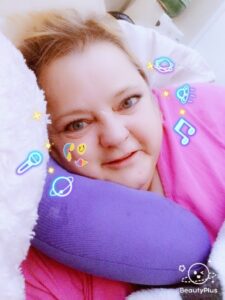 It is with great sadness that we announce the sudden passing of Gloria Sampson (nee DeLaval) on April 5th, 2018. Predeceased by her daughter Amanda, mother Gladys, father Maurice, and brothers George, Ray, Bruce, and brother In-Law Jack Haydu. Gloria will be deeply missed by her daughter Christal Brian(Allen), husband Dusty Sr. Sampson, ex husband George Emms, sister Betty Haydu, brothers Johnny DeLaval (Gina), Billy DeLaval, Robert DeLaval (Janet), Blair DeLaval(Laurel), sisters-in-law Sherri DeLaval, and Bernadette DeLaval. She will also be missed by her grandchildren Justice Sampson, Dusty Jr Sampson, Timothy Emms, Joshua Emms, Jonathan Emms. Gloria will also be missed by her many nieces and nephews, great nieces and nephews, many friends and her sweet puppy Achilles. Born in Sydney, NS, Gloria moved to Calgary in 1969 with her family, where she grew up, raised a family of her own, and enjoyed a full life. Gloria also enjoyed many years serving on the Ladies Auxiliary with The Royal Canadian Legion Branch 154. Services for Gloria will be held on Wednesday 11 April at 10:00 am, at Piersons Forest Lawn Chapel 4121 – 17 Ave S.E, Calgary, AB.