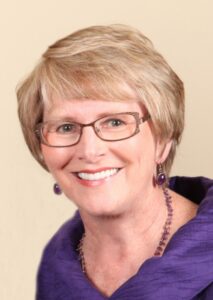 Glenda Stonehocker, 73, passed away in Okotoks, Alberta on October 6, 2019 surrounded by family.

Glenda was born in Raymond, Alberta the third child of Glen and LaVaun Bullock. She studied nursing at the University of Alberta, graduating in 1967. There she met her husband Ellis Stonehocker. Their courtship was filled with fun, laughter, and pranks. Glenda and Ellis married June 7, 1967, and moved as a couple to Calgary, Alberta where Ellis established his dental practice.

There she devoted most of her time to raising a family of six children. She was an attentive, fun loving, mischievous Mom. Her home was open to all and she made sure hers was the most fun home on the block. She loved throwing parties, baking, organizing car rallies, and making costumes, forts, and cardboard box mazes. She prioritized laughs and time with her children over ironed laundry and a clean fridge.

She viewed the world through her camera lens, and was lovingly nicknamed “Grandma Click” by her grandchildren. She never sat still, had multiple projects on the go, and was frequently up till 3am. When she wasnt busy photographing, she was always up for a trip to the mall, story telling, a long distance phone call, performing comedy or musical numbers, bursting into song, and preparing more food than necessary.

She made friends everywhere she went, and treated everyone the same whether she had known them 40 years, or just sat next to them on a plane. She lived without pretense, and endeared herself to all by being willing to share the highs, lows, and embarrassing moments of life.

Much of Glendas life was devoted to service and supporting others. She and Ellis traveled to many countries such as Cambodia and Honduras on service missions, culminating in a mission to South Africa from 2010-2012. Their work was focussed on supporting the young adults in Soweto. She loved these youth and was honoured to have them call her “Mom”. Upon their return to Canada, Glenda served with her husband in the Calgary Alberta Temple for the Church of Jesus Christ of Latter-day Saints, first as assistant and then Matron of the Temple. She was equally uplifted by time spent performing sacred ordinances as she was by whispered hallway conversations and sharing Coke Zeros in the basement with the temple engineers. It was important for her that the temple was a place of friendship and acceptance for all who attended.

Blessed with strong faith and a knowledge families can be together forever Glenda did not fear death. She was however terrified by the thought of food running out at her funeral luncheon. We invite you to join us for a time of visitation on Monday, October 14 from 6:00 to 8:00 pm at the Church of Jesus Christ of Latter-day Saints Parkland Chapel, 14540 Parkland Blvd. SE. A funeral service in her honour will be held at the same location on Tuesday, October 15 at 11:00 am with a visitation from 10:00 to 10:45 am prior to the service. A luncheon will follow the service and we will conclude with a graveside service at the Okotoks Cemetery.