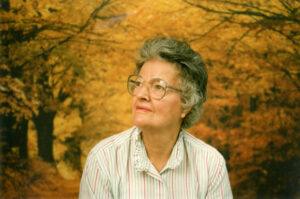 Gladys Janette Matson was born 29 December 1917 in Gwynne Alberta to Leonard and Agnes (Phillips) Scott, the sixth of nine children. She died 30 August 2014 in the wonderful Agape Hospice in Calgary at age 96. She was predeceased by her husband Freddie in 1981, a few months after their 40th wedding anniversary. She is survived by five children: Ann (Ron) Volden of Eastend Saskatchewan, Mervin Matson, Deirdre Russell and Clare Russell of Calgary, and Loretta (Nick) Anderson of Spokane Washington, and by 20 grand children and 49 great grand children.

Her early years were spent in the Wetaskiwin Calmar area Alberta. She often related fond childhood memories of her family, especially her grandparents’ farm and her associations with extended family. She came to Calgary with her family at age 10 when her father looked for work during the depression years.

She attended Western Canada High School and became a seamstress and worked at Hill’s Tailor Shop near the corner of 17 Ave and 14 St SW. She married Freddie Matson 17 October 1940. In 1941 they went searching for a place to build a home. On a prominent ridge on the outskirts of Calgary (29 Avenue south), they fell in love with the unobstructed view of the mountains, the prairie and the developing city (with the Palliser Hotel the tallest building). They choose two 25 foot serviced lots which they purchased for $67.50. Freddie began building their home with Gladys involved in the project. In 1942 they moved with their infant daughter Ann into a small part of the home under construction. Gladys’ family had moved so many times in her childhood years, she told Freddie she was never moving again. She remained in the home for 72 years, until three months before her death.

Across four generations they opened their home to over fifty people in need of a place to live while in transition. They hosted many gatherings of family, neighbors and friends and maintained a tradition of Christmas Eve open house right until this past Christmas.

She was a loving homemaker, neighbor, seamstress and cook; she engineered and participated in home and yard maintenance and improvement projects. She embraced many of her family’s friends who came to know her as “Gramma”. She studied her whole adult life, mostly the scriptures and humanities and child nurture and development, and maintained a journal of her daily thoughts and observations.

Gladys was an active member of the Church of Jesus Christ of Latter Day Saints, participating in many callings, functions and compassionate service. Even in her latter years with many physical handicaps she did not want to miss attending church, visiting with her friends and bearing her testimony of her love of Heavenly Father and the Savior and the Plan of Salvation.

A road to travel, a path to follow, from our Lord is plainly given.

He waits for us with love and patience to find the hallowed way that brings us back to Him one glorious happy day.

We will all treasure her memory and example.