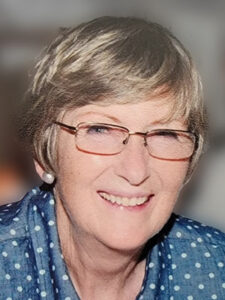 On Friday, January 13, 2023 Mrs. Grace Adamson, beloved wife of Richard Adamson of Calgary, Alberta passed away with family by her side at the age of 78 years.

Grace was born in Sydney, Nova Scotia on January 24, 1944 to parents Isabell and Lloyd Crowell.  Her parents were both from Nova Scotia, and met in Halifax during the war.
The family moved to Hamilton, and then to Burlington, Ontario after the war, where Grace attended Burlington Central High School.  After completing her schooling, she became a Registered Nursing Assistant (RNA).  Grace first worked at Joseph Brant Hospital in Burlington, and then Princess Margaret Cancer Center in Toronto, Ontario.  She later moved to Calgary and worked at the Lucerne Meat Plant (supplier for the Safeway stores).  Grace worked her way up to Branch Buying Manager.  She was the first woman to reach that level of achievement within the company.  Following a health crisis, Grace took a couple of years to travel the world and reflect.  She worked for a time as a Unit Clerk at the Alberta Children’s Hospital, then moved with her husband Richard, and his daughter, Natalie, to Durham, North Carolina, returning to Calgary in 2010.  Grace was known among friends and family for the integrity, dignity, and courage with any challenges she faced.  Grace was valued by many for her wise counsel.  She will be missed by all and her long-time loyal friend, Beth King Watson, who attended at her bedside to the end.

Besides her loving husband Richard, Grace is survived by her stepdaughter Natalie Neil Krohl and husband Ian of Raleigh, North Carolina; and her brothers Gary Crowell and his wife Gail of Burlington, Ontario, Bob Crowell and his wife Suzanne of Sault Ste. Marie, Ontario.  She was predeceased by her parents Isabell and Lloyd Crowell.

There will not be a formal service.  Cremation at Foothills Crematorium.