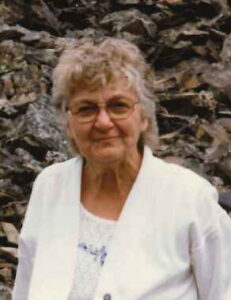 On July 13, 2020 in her 93rd year, Midge Creamer passed peacefully at Prince of Peace Harbour Manor, Calgary.
Midge was born on July 11, 1927 in Listowel, Ontario to Amos and Annie Fullarton. She grew up on her parentâ€™s farm together with her big brother, Harold. To those in her adolescence she was lovingly known as “Toots.” So much of who she was and how she dealt with the world was learned during those early years. We, as her children, lived vicariously through her as we listened to countless stories about the joys and difficulties of farm life, particularly during the depression and the second world war. Midge was mighty, with a get-it-done attitude a hundred times larger than her slight stature. She tackled the world, and when it tackled her back, she would just be all the more determined.
She and our Dad, Melvin (Bud) Creamer married in the late forties after his return from the war. She waited for him for years during that time, but they are even now, as he has had to wait for her since his passing in 1981. You better be ready for her, Dad!
After being married in Listowel, Mom & Dad moved many times to accommodate Dadâ€™s postings as a soldier in the army. Mom was right at his side, not always happy to move, but determined to do what was needed to be a strong & supportive army wife. Throughout those lean years of living on a soldierâ€™s salary and moving far too many times, Mom & Dad had 8 children. Ron (Sue), Reg (Sandy), and Terry in Listowel, Paul in Kentville, Brian and Cathy in Montreal, and Cindy and Joe in Calgary. One of Momâ€™s great sorrows was Cathyâ€™s passing a few short days after she was born.
Once in Calgary and after Dadâ€™s retirement from military life, they bought their own home and settled into life on â€˜Civie Streetâ€™. During the first few years Mom was burdened with the loss of her Mom, followed shortly by the passing of her brother, her Dad, and within that same decade, Mom lost her dear husband, Bud. In another great tragedy, son Terry passed away in 2000.
Through sheer intestinal fortitude and determination, Mom brought herself back from despair in order to continue to raise Joe, who was still a boy at the time of Dadâ€™s passing. She started working at Forest Grove Care Centre after having been a volunteer musician there for several years. As a full-time recreational therapist, Mom jumped knee deep into her program to ensure the seniors in her care experienced the joy of music, crafts, and entertainment. She helped hundreds of people enjoy their twilight years.
Continuing to work at Forest Grove for many years, she, herself, paid off the mortgage she and Dad had begun years before. She enjoyed traveling & cruising with friends, playing the piano, making quilts, painting, and keeping track of her growing band of grandchildren â€“ 12 in total. At the time of her passing, â€œNanâ€, as she was known to the grandkids, had a further 11 (and a half!) great grandchildren.
While there are many things we will never forget about our Mom, here are a few of the most wonderful ones: holiday meals she would single-handedly make for 30 people, her lush and bountiful vegetable garden, the pickles she made in the Fall, her love of animals, especially kittens, stories: all the bedtime stories she read us and all the family history she shared with us, our incredibly special Christmases, and most of all, the strength she brought forth in so many difficult times. She was a rock.
Mom, you will be missed.
***
Our family would like to express our sincere gratitude to the staff of Prince of Peace Harbour Manor for their kind and compassionate care.
A private family service will be held for Mom. If friends so desire, donations may be made in her memory to the Alzheimers Society of Canada (www.alzheimers.ca).