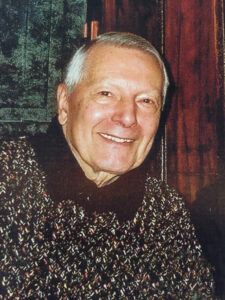 It is with great sadness that the family of Gerard Vanizette announce his passing on Wednesday, September 21, 2016 at the age of 93 years. Gerard is survived by his loving wife of 56 years, Gisele Vanizette (nee Amblard); his daughters Marie-Laure (David) Stanford and Isabelle (John) Horne; his nine adoring grandchildren and two adoring great grandchildren; his sister Josiane Beliveau of France; his niece Brigitte Beliveau of France; and his great niece Laura Kelberg also of France; not to mention numerous cousins in both France and Tahiti. Gerard was well known for his delicious chocolates at Gerard Chocolatier, as well as for his generous involvement in his church and community. Gerard loved music, nature and most of all his family, he will be greatly missed by all those who had the absolute delight of knowing him. A Funeral Service will be held for Gerard at The Church of Jesus Christ of Latter-day Saints – West Stake Centre (6560 Silver Springs Crescent NW, Calgary) on Friday, September 30, 2016 at 2:00 pm. Messages of condolence may be forwarded to the family at www.piersons.ca.