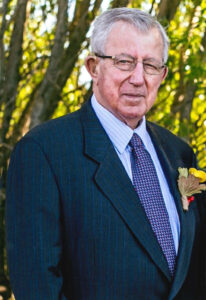 Gerald (Jerry) Joseph Kully July 17, 1940 – January 28, 2015 The family is deeply saddened to announce the passing of our beloved Jerry, husband and father, on Wednesday, January 28, 2015, at the age of 74. He will be forever loved and remembered by his wife of 45 years, Marjie of Calgary, his three daughters Leslie (Carl), Sheila and Janet of Calgary, and his son David (Candice) of Calmar. Also to mourn his loss is a large extended family and many friends. Jerry had a 40 year career in the Oil and Gas industry. He enjoyed golfing, travel and playing bridge and cribbage. He loved RVing to places that had lots of interesting history, geography and especially places close to home like Kananaskis. He was very dedicated to his family which was so very important to him. His fondness for pets meant he was always in the company of a dog or cat. Jerry loved watching old movies and musicals, and would often serenade everyone with his favorite songs. He was very appreciative and proud of his accomplishments and never took anything for granted. He enjoyed sharing stories of his life, new discoveries, and history from his traveling experiences. His charismatic, outgoing personality was one which always brightened everyone’s day and made daily life very special. The family will be having a private memorial with a future celebration of his life to follow in the coming months. In lieu of flowers, donations may be made to the Calgary Humane Society ( 4455-110ave Se Calgary, AB T2C 2T7) OR the Alberta SPCA ( 10806- 124 ST NW Edmonton, AB T5M 0H3).