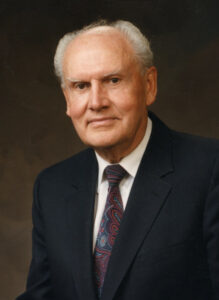 Elder Gerald Eldon Melchin passed away on Wednesday, June 15, 2016 at the age of 95 years. He will be lovingly remembered by his wife of 71 years, Evelyn; children Richard (Catherine) Melchin, Shauna (Terry) Murdock, Robyn (Nyle) Creason, Gregory (Helen) Melchin, Brook (Joy) Melchin, Wade (Kathleen) Melchin and Barbara (Rainer) Nitschke; foster daughter Tina LaRose; 39 grandchildren; 70 great grandchildren; brother Fred (Doreen) Henderson; and many more family and friends. He was predeceased by his parents Arthur & Rosetta Melchin, brother Howard Melchin, son in-law Nyle Creason and grandson Matthew Nitschke. Gerald was born in 1921 in Kitchener, ON. At a very young age they moved to Raymond, AB where he was raised. He served a two year mission for his church in Ontario where he met the love of his life Evelyn Knowles, a fellow missionary. He enlisted in the Canadian Air Force where he became a pilot officer. On July 12, 1942 Gerald and Evelyn were married in the Logan, Utah temple. They began their life together in Raymond and were blessed with seven children. Gerald worked with his brother in a local garage which led to building their own business, Melchin Auto Transport, which grew so large they had to move to Calgary. Gerald was kind and had great faith. While naturally unassuming he was called upon to provide leadership throughout his life. His talent to trust others and his ability to organize served him well in business, in the community, in the Alberta Social Credit Party and in the Freeman institute. He cared about Canada. His life was spent in service to his church as he was called upon to serve as Bishop and Stake President in Calgary, a Mission President in the California East Mission and as a Regional representative and General Authority of the Church serving on the leading councils in Salt Lake City, in England and northern Europe and again in Toronto as Temple President. Returning home to Calgary to be close to family, he continued service as a patriarch giving over 600 blessings. With Evelyn, his partner in this service, Gerald shared a special love. His example of devotion, care and love to her and his family is his greatest legacy. A Visitation will be held for Gerald at The Church of Jesus Christ of Latter-day Saints – Bow Valley Chapel (2526 – 24 Avenue NW , Calgary) from 7:00 – 8:30 pm on Friday, June 24, 2016. A Funeral Service will then be held at the same location on Saturday, June 25, 2016 at 11:00 am with visitation from 9:30 – 10:30 am. Interment will follow at Queen’s Park Cemetery.