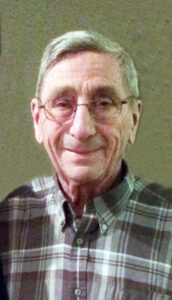 George passed away peacefully with his family by his side on January 15, 2017

George was predeceased by his son Kenneth George in 1997.

George left us with dignity and grace. His priority was to put the needs of his family first and even kept us laughing right to the end. His courage and strength amazed everyone who crossed his path. George had many hobbies including wine and beer making, for which he won awards, but his true passion was his Watkins business of 27 years, where he made many life long friendships with his many customers. He will be dearly missed by his family and friends.

Our heartfelt thanks go out to Dr. Gilles Lauzon, the many doctors, nurses and homecare professionals that helped him along his journey. A Memorial Service will be held for George at Country Hills Crematorium (11995 – 16 Street NE, Calgary) on Friday, January 20, 2017 at 2:00 pm. If friends desire, memorial tributes may be made to the Alberta Cancer Foundation, 710 – 10123 99 Street, Edmonton, Alberta T5J 3H1 (www.albertacancer.ca).