You are here: Obituaries / George Kostashuk 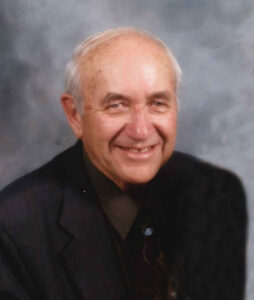 Kostashuk, George May 11, 1927 – June 11, 2014 George Kostashuk was born in Vegreville, AB, on May 11, 1927. George, the youngest of the six children of Manoly “Mike” and Anna, enjoyed a fulfilling childhood in Vegreville. At school he excelled in science and was keenly aware of the world around him. In 1945 George graduated from high school, and having attained the rank of sergeant in the local Air Cadets unit, was accepted into the Fleet Air Arm of the RCN. As World War II ended just three days before his 18th birthday George redirected his efforts to attending university. He was accepted to the University of Alberta and graduated with an Honours degree in Physics in 1949. While at U of A he spent his summers honing his scientific skills working in Suffield for the Defence Research Board. After a brief stint at Western Geophysical he moved to Vancouver to pursue graduate studies at UBC. However the lure of the oil industry proved too great so George returned to Western and took on the role of Party Chief, working his way across Canada with the company. Looking for more adventure from his work in Canada George took on an assignment in Milan, Italy, and began a life-long love of travel. It was while based in Italy that he proposed to and married Shirley Van Dusen of Wellington, Ontario, his loving wife of 58 years. Following civil and church ceremonies in Rome, the happy couple departed on their honeymoon to Capri and Tripoli (a working honeymoon!). After spending several years in the Mediterranean region George and Shirley returned to Canada to start their family. They settled in Calgary but only long enough to have two children before setting off to the Canary Islands for a posting at Western’s west African operations. Upon returning to Calgary, and having two more children, George started a new phase in his work exploring for oil and gas fields in Alberta with firms including Sinclair, Mobil, and Banff Oil. One of the many highlights of his career was his leading role in the discovery of the giant Strachan gas field in the Alberta foothills. George progressed with the growing Canadian oil industry, opening up new frontiers in the Arctic while conducting seismic programs with Calgary-based Velocity Surveys. Eventually he became Vice President and General Manager of Sigma Explorations, continuing his work in conventional and arctic seismic acquisition. George focused much of his career in frontier areas and was a pioneer in arctic seismic surveys. He was a dedicated member of Twin Rivers Toastmasters Club for 43 years. George was an Honorary Life Member of APEGA and received the CSEG Meritorious Service award as well as many other professional honours. As a proud Albertan George supported many initiatives and was very active in the geophysical community. George, with Shirley and their family, enjoyed skiing, boating, golfing, and the benefits of living in Calgary. He is survived by his wife Shirley, sisters Jeanette and Olyve, son Michael (Peggy), daughters Mary, Liz (Sean Hann), and special daughter Brenda Winston, grand children Christopher, David, Tessa, and Liam, as well as many nieces and nephews. George is pre-deceased by his son John, brother Stan, and sisters Kay Kenyon and Mary Pruner. George’s family extend their gratitude to the nursing and care staff of the Rockyview Hospital and Sarcee Hospice for their support during his brief illness. To honour George’s dedication to Geoscience, donations can be made in his memory to the CSEG Foundation (c/o [email protected] or online through www.canadahelps.org) and to the Heart & Stroke Foundation. A Memorial Service will be held at the Living Spirit United Church (629 – 49 Avenue S.W.), Calgary, Alberta on Monday, June 16, 2014 at 1:00 pm. Reception to follow at the Glencoe Club (636 -29 Avenue S.W.)