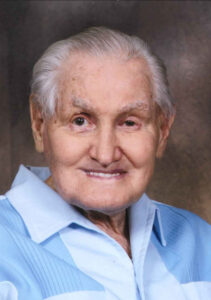 George Rath passed away on Thursday, November 3, 2016 at the age of 94 years. George will be remembered by his sister Freda (Herman) Schamber of South Dakota; his step-sister Monica (Bernd) Hallwas of Calgary, AB; his sister-in-law Crystal Rath of Penticton, BC; and numerous nieces and nephews. George was predeceased by his wife Lena, in 2011; his parents Jacob and Mary Rath ; his brother Ernst; his sisters Martha and Margaret. George was born in Russia and immigrated to Canada where he met the love of his life, Lena, and were married on February 18, 1950. In 1956 George and Lena moved to Calgary, AB. A Funeral Service will be held for George at Thornhill Baptist Church (128 Tache Ave NE Calgary, AB ) on Wednesday November 9, 2016 at 2 pm, with Interment prior to the service at 12 pm in Rocky View Garden of Peace Cemetery. A time of visitation will take place at Thornhill Baptist Church on Tuesday November 8, 2016 from 6-8 pm. If friends so desire, donations may be made to World Vision Canada at www.worldvision.ca.