You are here: Obituaries / Genie Hill 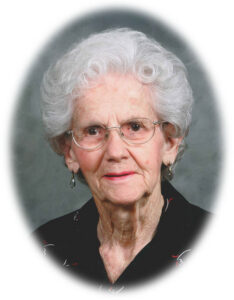 HILL, Thelma Virginia “Genie” January 30, 1918 – November 28, 2013 Genie Hill passed away on Thursday, November 28, 2013 at the age of 95 years. She will be dearly missed by her three children Grant Hill (Sue) of Okotoks, Randy Hill (Karen) of Dewinton and Linda Sparks (Frank) of Calgary; fourteen wonderful grandchildren who call her “Gramout”: Barbara Vance (Ben), Rob Hill (Tammy), Paul Hill, Mike Hill (Jessica), Peter Hill (Kristi), Mark Hill (Merrick), Matthew Hill (Christine), Shannon Hill (& son Levi), Craig Hill (Stephanie), Jeff Hill (Astrid), Steven Hill (Shelley), Mandy Hampton (Greig), Ginny Kellough (Danny) and Christine Sparks; and 39 grandchildren, who refer to her as “GG”. Genie is also survived by a sister Bunny Thorseth (Cy) of Edmonton, and many other relatives and friends. Genie was predeceased by two sisters Cecilia and Irene. Genie was born in Oyen, AB to Irish and Norwegian parents who homesteaded and operated a dairy farm. They moved their young family to Edmonton where she attended school, continuing her education at NAIT in Home Economics. She met and married Norman Hill, who served in the Navy. During the war years, she lived in Montreal, reuniting and returning to Edmonton when the war ended. The family then moved to Calgary which became their home. Genie was a remarkable seamstress and was a trusted care giver to many children. Genie lived a life of integrity, was deeply spiritual and devoted to the United Church. During the past three decades she actively participated in the Choir at Central United Church. She lead a disciplined life that reflected her belief: working hard, living frugally and being loyal. Physical activity, daily walks along the river, exploring and traveling where part of the fabric of her life. A sunny disposition, a great sense of style and an abounding love and devotion to her family were ever present. A favourite mantra was “Work hard, do what you’re told and you’ll get along just fine”. She has left a remarkable legacy for those of us she left behind. A Memorial Service will be held at Central United Church (131 – 7 Avenue SW, Calgary) on Tuesday, December 3, 2013 at 11:00 a.m. If friends desire, memorial tributes may be made to Central United Church or the Salvation Army. Messages of condolence may be forwarded to the family at www.piersons.ca.