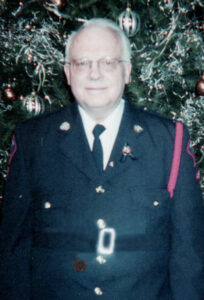 Fred Reil passed away on Sunday, April 16, 2017 at the age of 79 years. He will be lovingly remembered by his wife of 50 years Heather; children, Andrew (Annette) Reil; Marcia (Thorsten) Nesch, and David (Karene) Reil; grandchildren, Jonathan, Victoria, Alexandra, Christopher, Elizabeth, McEwen, Cedar, Charles, Clive, Olivia, Gabrielle and David; siblings, George Reil and Arlene (Delbert) Helgeson; and many more family and friends. He was predeceased by his siblings Dora Jackson, Arland Reil and Ellen Sorensen. Fred was born and raised in Magrath, AB. Upon returning from his two and a half year mission to Germany he attended the University of Alberta where he received a Bachelors Degree in Chemical Engineering. He then moved to Sudbury, ON for work which is where he met the love of his life Heather. After 7 dates, they were engaged and then married a short time later. Not long after, they moved west again and made Calgary their home. Fred enjoyed a long carreer with the Calgary Police as a systems Programmer. He loved music and sang in many choirs, including the Calgary Police Choir. His greatest passion was his family which is where he focused most of his time. He will be greatly missed for the loving, husband, father, grandfather and friend that he is. The family would like to express their gratitude to the staff of the Dementia facility of the Beverly Care Centre Glenmore for their exceptional care of Fred. They treated him like family and it was noticed and appreciated. A Funeral Service will be held for Fred at The Church of Jesus Christ of Latter-day Saints – Willow Park Chapel (940 Acadia Drive SE, Calgary) on Friday, April 21, 2017 at 10:00 am. Interment will follow at Mountain View Memorial Gardens, Calgary.