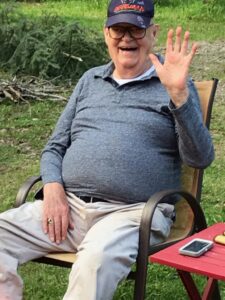 Frederick Leonard Butler, beloved Dad, Grandad and Great Grandad, peacefully went home to his Lord on Monday, May 17, 2021 at the age of 92.

He was predeceased by his dear wife Joan in 2015.

Fred was born near Loreburn, Saskatchewan on July 4, 1928, one of 13 children to his parents, Marie and Edward Butler. A child of the depression, life was not easy, but it shaped him to be the person that he was.

Fred joined the Navy in1945 at the age of 17 and served aboard the HMCS Warrior till the end of the war. He then started working for the CPR and moved to Calgary in 1949.

It was on one of the trains that he met Joan who was returning home from a trip to Florida. Fred and Joan were married in 1951 and started their family and life together.

Seemingly always willing to take a chance and ever an optimist, Fred entered the insurance business and eventually started his own brokerage. He also worked for the Calgary Board of Education and then opened his own cleaning business with his daughter, Jodie.

Dad had a strong work ethic which he mentioned throughout his life. There was always something more to do whether it was in business, working in a garden or just puttering around when that became all he could do. Even just sitting around caused him to get a game of cards going. Cards. Just mention the word put a smile on his face right to the end. He would play all night if you wanted.

Dad always had confidence that tomorrow would be a better day and Calgary was always the place where the sun was to shine. The Stampeders would win the Grey Cup this year for sure and The Flames were a shoe in for the Stanley Cup.

Fred had a great love of western music. Marty Robbins, Johnny Horton and Hank Williams were favourites. As well John Wayne and Clint Eastwood just never made enough movies to satisfy Dad. Those movies could run over and over forever if he had his way.

His children could always be sure that their friends were welcome in his home. Fred could take jokes and his love of playing cards even got him to try to learn to play bridge for a little while.

What he couldn’t understand was how anyone could enjoy a water fight. They infuriated him particularly if it was in the house.

While enjoying his occupations, Fred was also active in sports in his younger days. He played hockey with a team in Bridgeland and was a pitcher for a team in the insurance business as well as for the Shepherd King Lutheran Church team. He and Joan also bowled in a league at the Chinook Bowling Lanes.

Fred was a devoted member of St. Matthew Lutheran Church for many years. He grew deeply in his faith and walked with Jesus, who Dad knew as his Saviour and trusted as Lord. Never one to hold back, Fred was over eager to tell people about Jesus.

For that matter Fred was able to talk with anyone about many things. He had a stack of stories about growing up and about his brothers and sisters with whom he loved to catch up on the news.

While Fred was living with his youngest daughter, Jodie, he also would enjoy staying with the other kids as well. In his last months he was able to have extended visits with all of the kids.

Quick minded to the end, Dad’s body just couldn’t support his long “to do” list, and the Lord called him home.

We will miss him terribly but take comfort in knowing he is again Home with Joan.