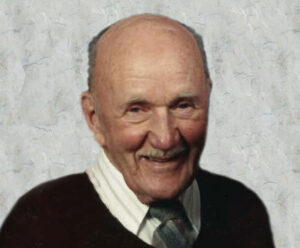 Frank Holman – Architect December 11, 1924 April 1, 2013 Frank Thompson Holman, 88, was born, raised and died in Calgary. Predeceased by his 5 siblings, his wife Freda (Dietiker 1977) and son Bruce (2004). Survived and missed by his son Lorne, daughter-in-law Tara McCullough and grandson Stephen. Also survived by his ex-companion Helen Conley who moved to Ottawa in 2012. Frank was a WWII pilot, married Freda Sept 3/47 and worked as an architect in Ottawa and Red Deer. He was a long time Rotarian, glider pilot and GREAT dad. MANY thanks to Lawrence and Myrna Jensen, Rich Ritchie, Cindy Huber, Dr. Raymond Hulyk and others. Tribute service, Tuesday, April 9th, 2013 at 2:00p.m. at Gaetz United Church, 4758 Ross St., Red Deer. Copy and paste in web browser to view video tribute. http://videos.lifetributes.com/387486 In lieu of flowers, please donate to any Rotary Club.