You are here: Obituaries / Frank Haklar 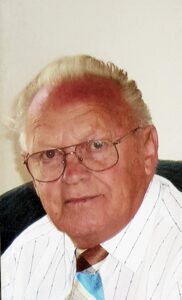 It is with heavy hearts that the family and dear friends of Frank Haklar announces his passing on July 25, 2018, in Calgary, at the age of 84 years. Frank is survived by his sisters Margit and Maria of Hungary and their families, his close friends Sarolta Varga, Alex Varga, Charlotte Farkas, and their families, as well as numerous other friends. He is predeceased by his wife Martha, his parents and his brothers. Frank was a man that some would refer to as being the salt of the earth; he was a simple man who enjoyed life. After retiring from the City of Calgary as a heavy equipment operator, if he wasn’t found tending to his stunning gardens, he was off in the mountains fishing. Frank was a kind hearted man who was soft spoken and willing to give the shirt off his back if someone needed it more than he. Simply put, Frank was a man who was loved by all and will be greatly missed by all those who had the pleasure of knowing him. A Funeral Service will be held for Frank at Pierson’s Funeral Service (4121 17 Ave SE, Calgary) on Monday, July 30, 2018 at 2:00 pm.