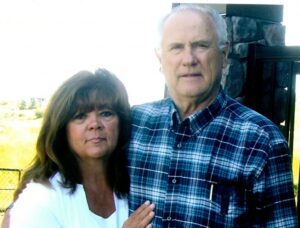 Ethan David O’Bray and Donna Arlene Milne O’Bray, loving parents, grandparents and great-grandparents, both passed away on October 16, 2018. Their life-long love carried them through many times of happiness and heartache, including through their courageous battles with cancer as they passed away within 40 minutes of each other.

David and Donna are beloved by their children, Kim (Duane) Adams, LeAnn OBray, David (Trina) OBray, Jay (Julie) OBray, Dale O’Bray (deceased), Dawn (Frank) Moeller, Robert (Wendy) OBray, Greg (Nikki) OBray and Daren (Liberty) OBray. They are also survived by 25 grandchildren and 12 great-grandchildren. David is survived by his four sisters, Laurel (Cyril) Jolie, Arlene (Len) Barrie, Sharon (Stewart) Gorner and Lynn Gulmick. Donna is survived by her brother, Garry (Laurina) Milne and her sister, Lynne (Greg) Boehlke. They are survived by a much larger extended family and many dear friends. David was predeceased by his parents, Joe and Elsie OBray. Donna was predeceased by her parents, Jim and Dolly Milne, and her sister, Joyce Jager.

David moved to Calgary in 1961, and worked driving truck for his Uncle Lubert OBray. Shortly thereafter he met his beloved wife, Donna and they were married August 22, 1964, in Calgary, later being sealed for time and all eternity in the Cardston, AB temple. David became a ticketed plumber and worked in the trade for 50 years finishing his career at the Foothills Hospital, working right up until his mesothelioma diagnosis. David enjoyed his employment at the Foothills Hospital where he had great co-workers and friends. Donna gave birth to 9 children and throughout their marriage was a dedicated homemaker and mother. As the family grew, she extend her love and dedication to her entire posterity. David and Donna served others tirelessly. David went out of his way to help widows and those who were in need, often serving by using his plumbing and mechanical skills. Donna was always serving those in her family, going out of her way to make sure each person was given special love and attention. She loved her garden and flowers and her yard always looked beautiful. Donna had a passion for music and was a talented pianist. David loved being outside. He was an avid hunter and guide and often spent time in the great outdoors with his children and friends. He loved to fly, earning his private pilots license in his early years and flying whenever he got the chance. David loved to play baseball in his youth and played even into his adulthood. David and Donna were the best father and mother any child could ask for and we will miss them dearly.

A Funeral Service will be held for both David and Donna at The Church of Jesus Christ of Latter-day Saints – Parkland Chapel, 14540 Parkland Blvd. SE, Calgary on Saturday, October 20, 2018 at 11:00 am with a visitation from 9:30 to 10:45 am. Interment will follow at Mountain View Memorial Gardens. Everyone is welcome to join the family for lunch back at the Chapel following the interment. The family extends their sincere gratitude to the many wonderful care providers who have helped with mom and dad. Further information and messages of condolence may be forwarded to the family at www.piersons.ca.