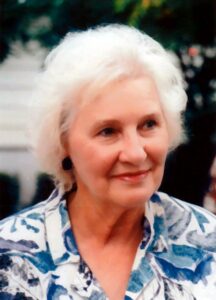 Estelle is survived by two daughters Lesley Tymchuk (Ron) of Whiterock, BC and Corinne Cairns (Wally) of Wichita, KS; one son Steve Ouwerkerk (Linda) of Calgary; eight grandchildren Allison, Wes, Cami, Shannon, Dee, Carlee, Taylor and Hayley; 18 great-grandchildren and many other relatives and friends. Estelle was the youngest of 10 children and is survived by one sister Connie Gregory.

Estelle was born and raised in Durban, South Africa. After High School she met and married her sweetheart Gerry and they began their life together. In 1966, they decided to bring their young family to Canada, moving to the Vancouver area. In 1969, they moved to Calgary where they established deep roots. Estelle was the model mother and homemaker, making her husband and children her top priority. She was a excellent cook and loved to tend the garden with Gerry. Estelle was kind, thoughtful and generous which were evidence of her thoughtful consideration of others. She was a dedicated member of her Church and served faithfully, always putting others first. In 2014 with declining health, she moved to Whiterock, BC to be closer to her daughters. She is loved by her family who will miss her dearly.

Private family interment will be held on Friday, April 20. A Memorial Service will be held for Estelle at The Church of Jesus Christ of Latter-day Saints – Willow Park Chapel (940 Acadia Drive SE, Calgary) on Saturday, April 21, 2018 at 10:00 am.