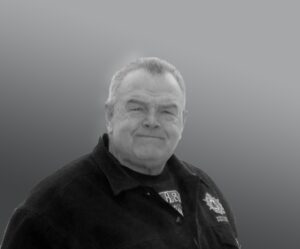 It is with heavy hearts that we announce the loss of our father, loving grandfather, and good friend, Ernest Barry Edwards, beloved husband of Brenda Edwards, who passed away on March 6, 2017, at the age of 66. Barry was born April 22, 1950 in New Westminster, BC to Rita and Ernest [Bunny] Edwards. Growing up primarily in Calgary, Barry often recounted his time spent in the Forest Lawn area. He was married to Brenda in June of 1973 and moved to their current family home in East Coulee in December of 1978 where they raised their family and made many friends in the community. Barry worked as an accomplished tradesman with tickets in pipefitting, gas fitting, and plumbing. He spent his final twenty years of employment at the Drumheller Institution before his eventual retirement. Barry enjoyed many interests and together Brenda and Barry created many fond memories scuba diving, sailing their boat in the Bahamas, and sharing his passion for his first love, motorcycles. Barry was predeceased by his Mother Rita (Mike) and Father Ernest [Bunny] (Terry).He is survived by wife Brenda, daughters Erin (Mike) and Kim; sons Ike, Josh, and Zach; his sisters Debbie (George) and Michele (Derrick); and brother Louie (Joanne). A loving grandfather, Grandpa Bear, will be missed by grandchildren Kayla, Tristyn, Gemma, Katie, Ben, Hunter, Lucas, Alison, Owen, and Ivy. A memorial for Barry will be held at the East Coulee Community Hall on Saturday, April 15, 2017 at 1pm.