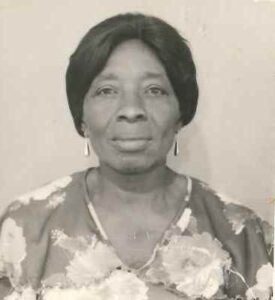 Emiline “Emily” Satirah Scott of Calgary, Alberta, passed away peacefully on Wednesday, March 25, 2015 at the age of 96 years. She is survived by her loving daughter, Ann Johnson-Jourdain; her granddaughters, Sophia Walsh, and Susan Walsh; her adopted son, Mr Vincent McPherson; grandson, Hank Walsh; great grandsons, Jamie Lee Walsh, Jonathan Walsh, Chance Walsh, Nicholas Walsh, Jerome Rex, Jullius Schochenmaier, and Appolo Schochenmaier; great granddaughter, Shayanna Cesaire; and great-great granddaughter, Isabella Hardy. Emily was predeceased by her parents, Theresa Morrison and Adolphus Scott; and her sibilings, Alma McDermott, Rupert McDermott, and Emanuel McDermott. Emily was a wonderful mother, grandmother, great and great-great grandmother; a true matriarch. She will be deeply missed by her family but forever in their hearts. The family would like to express a thank you to the wonderful staff of Hillcrest Extendicare for their care and compassion. A visitation will be held at Pierson’s Funeral Service, 4121 17 Avenue SE, Calgary, Alberta on Wednesday, April 1, 2015 from 7:00-9:00pm. A Funeral Service will be held on Thursday, April 2, 2015, at 11:00am at the Berean Church of God, 1111 33 Street NE, Calgary, Alberta. Interment to follow in the Rocky View Garden of Peace Cemetery, in the section Garden of the Good Shepherd.