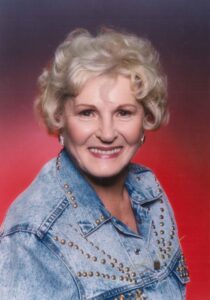 Emelee Marchant passed away in Airdrie on August 11, 2022.

Emelee was born in Calgary at the start of the Depression. Her parents, along with her sister Rose, moved to Raymond, Alberta, in search of work on the sugar beet farms. After a couple years of saving and another sister Victoria, they purchased a ¼ section near Duchess, Alberta where they continued to farm and expand their operation. After graduating from Brooks High School she went on to attend Business College in Calgary and worked in the oil and gas sector.

She married Bob Marchant in 1961 and after a few years in Calgary they purchased 130 acres between Conrich and Delacour where they raised their 3 girls. Bob continued his career with Canada Safeway and she stayed home with the girls and helped to run the farm.

Emelee got her Real Estate License in the late 70’s and went on to purchase and operate 3 day cares through the 80’s. She then started an embroidery business and with her passion for sewing she always had a project on the go. She was very artistic and even took painting classes and painted some beautiful pictures. Singing and dancing were also a big part of her life and she sung with the Calgary Austrian Choir and took up square dancing.

At every opportunity she would travel to wherever someone asked her to, with the highlight of the trips being the ones that were back to the “Old country” – Slovakia – to visit and spend time with family. She always went with family from here and was very proud of her Slovakian family.

Nothing was as important to her as family – and it showed in every way. Her grandchildren kept her very busy with all their events and activities but it started long before that. Family events were always very important and the highlight of whatever season it was, or if it was just to see each other. We spent them surrounded by cousins and aunts and uncles and grandparents. This is the legacy of her and her 2 sisters Rose and Victoria and their mother Emily. Her smile, laughter and love of family will be missed but it will go on with what these 4 remarkable women started. All because Emily Cvikova immigrated to Canada from Slovakia. Our Slovakian family is still a part of our lives today because of them.