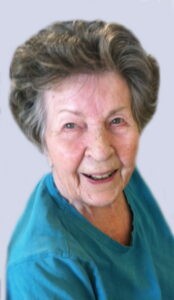 Ellen Penny passed away on Sunday January 7, 2018 in Calgary, AB. She was born June 6, 1924 on the Jackson family farm near Strongfield, SK as the 10th of 13 children to parents John and Emma Jackson. John died when she was 6 and Emma when she was 10 leaving her to be raised by several older brothers and a sister during the Depression.

During WWII, she worked in a war factory in Thunder Bay, returning to Saskatchewan to meet and marry her husband Douglas Penny of Abernethy, SK in 1949. Doug had spent his war years as a tail gunner flying over Germany.

Mom loved gardening, cooking to well done and entertaining her extended family as well as travelling with Doug until his death in 2007. She also worked as a hairdresser and at Sears until her late 60s.

She is survived by her sons Rick (Christine) of Saskatoon, Jay (Connie) of Calgary and her only grandchild Jennifer (Anthony) of Saskatoon as well as her sister Irene (Bob) Taylor of Saskatoon.

Mom was as tough as they come, never at a loss for words and above all a fiercely loving and caring wife, mother and grandmother.

The family would like to thank the compassionate and considerate staff at the Bethany in NW Calgary in both Levels 4 and 7 where mom spent the last 8 years.

She will be greatly missed. We love you, mom!

A Private Service will be held. In lieu of flowers please consider a donation to the Alzheimer Society.