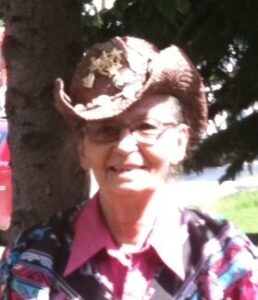 It is with the deepest of sadness and the heaviest of hearts as the angels ring the bells to rejoice and call another angel home. It’s believed that Ellen Agnes Schmidt (Saubak) of Calgary, Alberta) was called from the family home to be with the Lord during the morning hours on January 12, 2015 with her beloved dog and best friend Tea’ka at her side. Affectionately known as “Agnes”, she was born on May 31, 1939 in Edmonton, Alberta and was one of seven children to parents, Halvor and Elizabet Saubak. She was predeceased by her parents Halvor (Minnesota) in 1966 and Elizabet (Froese) (Rosthern, Saskatchewan) in 2004, nephews, Fredrick Lind in 1967, Neil Saubak and James Tough, both in 2006, brother, Earl Saubak in 2007 and twin sister, Hannah Diana Lynch in 2011. She was also predeceased by loving husband of 39 years Joseph “Adam” Schmidt (Saskatchewan) in 2012, after a short but courageous battle with lung cancer. “Agnes” will be lovingly remembered and leaves behind her two children Edward “Wayne” (Terri-Lee) and Ellen “Randine” (David Hele) both of Calgary, Alberta, grandchildren Britney (Taber), Dillin (California), Bryden (Taber) and Austin (Missouri). She was also survived by numerous brothers, sisters, brother-in-laws, sister-in-laws, cousins, nieces and nephews. She will forever be remembered for her kindness and generosity to others and her willingness to be a friend, but most of all to never making judgement of people. She will be fondly missed by the community where she volunteered at Evangel Christian Assembly each Tuesday for years building food hampers for families less fortunate. She was also very proud to have American decent and loved to go to the USA when she was younger at every opportunity she was able. One of Agnes’s favorite pastimes was to feed the birds that frequently visited the family’s front yard each year for over 40 years. She also enjoyed television games shows and reading cook books, often sharing cooking tips with her many friends. Her greatest enjoyment in her life was her children and grandchildren, who will miss her deeply. A Very Special Thank-You to all the family and friends who continued to support Agnes after the loss of her husband ensuring that she was well taken care of. Also, to the attending members of the Calgary Police Service and to the Medical Examiner Sue Wigle. At her request, “Agnes” asked that there be no funeral service and that she be cremated and laid to rest at the Warburg Cemetery along side her parents. “Until we meet again…..Thanks for the Memories” “Your Simply..The Best