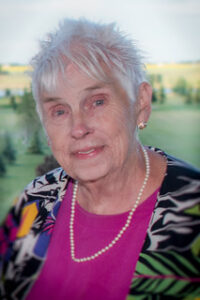 Elizabeth Harrison passed away after a short, courageous battle with cancer on Thursday February 14, 2019 with her son, Stephen by her side. Elizabeth will be lovingly remembered by her son, Stephen Harrison; brother, Ian (Dorothy) Wilson, their children, Kyle & Erin (Steve); niece, Melissa (Steve) Stahl, their children, Cadyn & Landon; niece, Cindy (Chad) Burkart, their children, Nathan nephew, Luigi (Nancy) Ronca, their children, Luke, Natalie (Chris) her very close friend of 57 years, Audrey Dain; 2 brothers-in-law, 3 sisters-in-law along with numerous nieces and nephews in Kelowna. She is pre-deceased by her husband of 46 years at the time of his passing, Carl; parents, John and Mary Wilson and sister and brother-in-law, Isabel and David Petrone. Elizabeth was born in Winnipeg, MB and was the oldest of three children. She began working at Girl Friday Office Services as a secretarial aide. In the early 60’s, while employed at the Fuller Brush Company, she met her oldest and dearest friend, Audrey. Following that, she worked at ParaGlass where she met Carl. They were married in 1966 and moved to the Bowness neighbourhood of Calgary in 1969 where they stayed until the time of their passing. After their son, Stephen was born in 1970, Elizabeth left the workforce and dedicated her time to her home and family. In her spare time, she enjoyed playing Bingo with friends. The Harrison family would like to thank Ron & Rosemary Young, Luigi & Nancy Ronca, Audrey Dain, Marc & Pam Lindley and the Palliative Home Care team for all their kind and caring support during Elizabeth’s illness the past several months. A Celebration of Elizabeth’s Life is being planned for a later date. Messages of condolence may be forwarded to the family at www.piersons.ca.