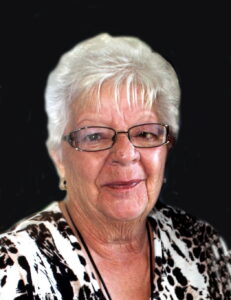 On January 11, 2021 Gayle Watson passed away at the Foothills Medical Center and went to join her Mother and first husband Gerry.

In 1970 she married Raymond Gerald Watson and lived around Northern and Central Alberta while her husband worked with heavy construction projects. To this marriage there were two sons born. She lived in Airdrie for a number of years and for the last 27 years resided on a beef ranch on Jumping Pound Creek. Gayle worked with a number of businesses in and around Calgary and treasured her association and lifelong friendship with Kai & Margaret Mortenson. She enjoyed volunteering with the board of CRAB Society (the fore runner of the Rockyview HandiBus Service). After coming to Jumping Pound, she enthusiastically became involved as secretary and board member of the Cochrane Foothills Protective Association- Rural Crime Watch, an affiliation she was active with until her passing. She looked forward to branding weekend each year and association with her friends in the rural crime watch and ranching circles. She was one of the first to volunteer for events and was a familiar face at the CFPA information tables. She was very supportive of the Special Olympics organization through her son Wade. One of her joys was setting the family and friends around a festive table. She will always be remembered for sharing her warmth and her smiles.

Gayle is survived by her life partner, James (Jim) Bateman of Jumping Pound; son, Wade Ashley Watson of Calgary; siblings, Cynthia Harrison of Calgary, Neil Harrison of Strathmore, Rosemary (Owen) Lindsay of Calgary. She was loved by her nephews, Ryan, Dennis, Michael, and Donovan as well as her grand-nieces and nephews. Gayle was predeceased by her son Timothy Watson in 1972 and her husband Gerald (Gerry) Watson in 1987 along with her mother in 2009 and her father in 1968.

A visitation with Gayle and her family will be held at Piersonâ€™s Funeral Home (4121 – 17th Avenue SE) on Saturday, January 16th from 2:30 – 4:30 pm. Cremation will take place afterwards and internment will follow in the Airdrie Cemetery at a later date. COVID restriction limit attendance to 10 people at a time. A Celebration of Gayleâ€™s life will be announced for later in the spring. If friends desire, donations are directed to the Alberta Heart & Stroke Foundation or the Jumping Pound Hall. Gayleâ€™s memory and care has been entrusted to Piersonâ€™s Funeral Home at 4121 – 17 Ave, SE. For inquiries please contact 403-235-3602.