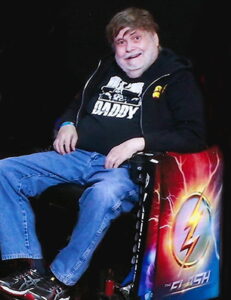 It is with sadness we mourn the passing of our uncle, brother, and friend – Eldon Ross Fleming on the anniversary of his fatherâ€™s birthdate, September 10, 2020. Eldon was born in Vulcan Alberta on November 16, 1946 and was 73 years old at the time of his passing.
Eldon was schooled in Vulcan where he graduated with a high school diploma. Eldon loved learning about computers, smart phones, e-readers, tablets and spent many hours studying computer programming books. We could ask him any computer or smart TV question and he seemed to know it all!
Eldon loved collecting and watching DVDs. Some of his favorites were old westerns, Star Trek and a number of superheroes. His favorite logo was Superman.
Eldon also enjoyed learning about family history. He was always happy when he was able to connect with a long-lost relative on Facebook and enjoyed seeing the updates from various nieces and nephews.
Eldon was predeceased by his parents (James and Eva Fleming), his siblings, June (and Tom Beckner), Lorna, Marlene, Larry (and Arthena Fleming), Jimmy, his nephew Clifford Beckner and great niece Kelsey Roberts.
Eldon is survived by his brother Peter (Maureen) Fleming of Hill Spring Alberta, sister in law Myrna Fleming, many nieces (including Bettie Orchard and Bonnie (Tom) Bateman , nephews and great nieces and nephews. Eldon really appreciated the visits, phone calls and cards he received over the years. Each one brought a smile to his face.
Eldon will be especially missed by his childhood friend of 50 years, Gerald (Jerry) Deglow and his brother Brian who all have been roommates for many of those years.
The family would like to express their deepest gratitude to the staff at the Foothills Hospital and the Hemodialysis unit in the Sheldon M. Chumir Health Center. Eldon was a favorite amongst hospital staff for his kind and polite demeanor. Eldon very much appreciated all that was done for him. Even when Eldon was suffering he never complained and endured well.
A graveside memorial will be held at a family plot in the Queenâ€™s Park Cemetery in Calgary post pandemic.
In lieu of flowers, please consider a donation to the Hemodialysis unit in the Sheldon M. Chumir Health Center in Eldonâ€™s memory, https://www.calgaryhealthtrust.ca/your-impact/our-stories/60-000-donation-to-hemodialysis-unit-ensure-patient-comfort/