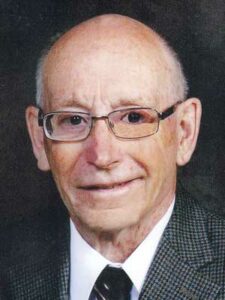 It is with much love that the family of Eldon mourns his passing at the age of 90, in Okotoks, Alberta.

Eldon was born in Bristol, Connecticut and raised on a small family farm at the Barony on the Saint John River in New Brunswick. He graduated from South Hampton Regional High School in 1949 and in 1955 joined the staff at Mutual Life of Canada in the mortgage department in Saint John, N.B. Transfers took Eldon, his wife Barbara and daughter Catherine to Ottawa, Waterloo, Ontario and finally Calgary in 1976, where he was the Manager of Mortgage Investments. After 39 years at Mutual he retired in 1994. During his retirement years, Eldon and his second wife Marianne enjoyed travelling, cruising and time with their growing family. Community service was very important to Eldon and he volunteered many hours delivering for Meals on Wheels, driving patients for the Canadian Cancer Society and serving in a variety of capacities at Deer Park United Church where he was a member for 40 years.

The family wish to thank the staff at the Foothills Country Hospice for their wonderful care and kindness to Eldon and support to our entire family.

Those wishing to pay their respects may do so at Pierson’s Funeral Service (4121- 17th Ave. SE, Calgary) on Friday, October 15, 2021 from 7:00-9:00pm. Due to COVID restrictions, personal invitations will be extended to attend the funeral service on Saturday, October 16, 2021 at 11:00am. Those wishing to watch the service from the comfort of their home may do so at the following  link: https://youtu.be/fzYUTfYnwp4

In lieu of flowers, donations may be made to the Memorial Fund at Deer Park United Church, Foothills Country Hospice or the charity of your choice.

Hugs from home can be submitted under the resources tab.