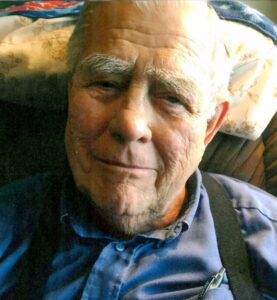 It is with great sadness we announce that Eldon Doerksen Toews passed away on November 22, 2017 at the age of 84 years. He is lovingly remembered by his three children; LaDonna Toews-Damude (Stewart), Geraldine deVries (Paul) and Eldon Toews Jr. (Julie), all of Calgary. His five grandchildren; Griffin, Danielle, Samantha, Ethan, Ryan as well as his great granddaughter, Katia, will miss their Grandpa, who always had a joke and a smile for them. Eldon also leaves behind 2 sisters, Emelyn and Norma and 2 brothers, Al and Gerard. He was predeceased by his dear wife of 38 years, Kathleen Joyce Toews, 2 brothers, Bill and Don and his parents, Marie and Isaac Toews. Eldon was born in Santana, Kansas, grew up in Steinbach, Manitoba and settled in Calgary. He was a good-hearted man who worked hard his whole life to provide for his family. He was a bit of character who loved to joke with everyone and kept his sense of humour right to the end. A private gathering will be held to celebrate Eldon’s life. In lieu of flowers, memorial donations may be made to: The Brenda Strafford Foundation, 4628 Montgomery Blvd. NW, Calgary, Alberta T3B 0K7.