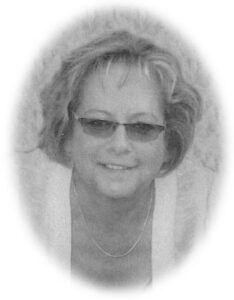 January 10, 1958 – October 25, 2013 Elaine passed away on Friday October 25, 2013 at the Rockyview General Hospital with her family by her side. She will be dearly missed by her husband Danny, their daughter Kendra Enerson (Jeff), their son Daniel Masson (Catherine), their three grandchildren Zachary, Ryan and Kiara and large extended family. Elaine was predeceased by her father Douglas Ballingall and her mother Janet Wilson. Born in Buckhaven, Fife, Scotland, Elaine immigrated to Canada in 1977 to work as a nanny. Soon after immigrating, she met the love of her life, Danny, with whom she married and started their family in 1979. Elaine enjoyed cooking, baking, preserving fresh vegetables from her garden, ceramics, painting and recently started quilting. A little bit of a social butterfly Elaine was surely one of the only people who could run to the corner store and return home two hours later without ever having left the community. A life celebration in honour of Elaine will be held at the Boulder Creek Golf Course, 333 Boulder Creek Drive, Langdon, Alberta on Sunday November 10, 2013 at 2:00 pm.