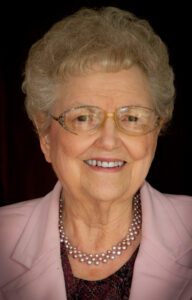 Elaine Stevenson Low passed away on October 16, 2016 in Calgary, Alberta at the age of 86. She is lovingly remembered by her six children and their spouses – Donald and Susan Low, Gary and Wendie Low, Cathy and John Swendsen, Gordon and Laurie Low, Murray and Nadine Low, and Carolyn and Coy Beaton, 26 grandchildren and their spouses, 53 great-grandchildren, her brothers Ronald (Brim) and Joseph Stevenson, and many in-laws, cousins, nieces and nephews. Elaine was born in Raymond, Alberta on June 18, 1930. She attended University of Alberta and obtained her teaching certificate in 1949. She then taught near Milk River, in Coutts, Raymond, Cardston, and later as an substitute in Calgary, Stirling, and Lethbridge. Elaine married Richard (Dick) Low in the Alberta temple. They lived in Cardston for six years, then moved their young family to Calgary where they spent the next 20 years. Dick’s work took Elaine and the last two children at home to Lethbridge where they lived for 25 years. During that time Elaine and Dick served a 1 year mission to New Zealand in 1991. In 2001 they moved back to Cardston to enjoy retirement. After Dick’s passing in December 2013, Elaine moved to Calgary to be close to her children.

Elaine was devoted to Dick, to their ever growing family and to her faith. She spent many years in dedicated church service and particularly cherished her work in Relief Society. Elaine loved to sew, creating beautifully made clothes for herself and her children. She also made numerous quilts, afghans, family history books and calendars. She enjoyed participation in Sweet Adelines chorus, Daughters of Utah Pioneers, Color Me a Season fashion consulting, and a few years as a realtor with Schwartz Reality.

Elaine faced the increasing difficulties of age and declining health with grace and without complaint. She is loved and admired by her family and friends and will be greatly missed. Her funeral service will be held at The Church of Jesus Christ of Latter-day Saints, Sundance Chapel, 100 Sunpark Drive SE in Calgary on Saturday, October 29 at 11 am. Friends may meet the family from 10:00 to 10:45 prior to the service. Interment will be in the Cardston cemetery on Saturday afternoon at 4 pm