You are here: Obituaries / Eileen Burton 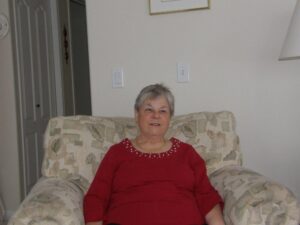 Eileen passed away February 12, 2014 in the peaceful surroundings of Agape Hospice following a valiant struggle with cancer. Eileen was born in Ayr and spent the first years of her life there, surrounded by loving family and friends. Later, her childhood was in and around Wiltshire amongst the villages and farms of the area. In 1965 she and a friend emigrated to Calgary where they engaged in the restaurant business for a number of years. in 1968 She married Rick. The family grew with the addition of two sons in 1971 and 1973 respectively and she became largely a stay at home mum. While raising her family, she found time to have two short careers. The first was the Calgary Co-op, rising to the manager of the Brentwood and later the Deer Valley Cafeterias. In 1987, she became involved in the Olympic Games at the University of Calgary, something she really enjoyed. She continued with the U of C until 1994. Upon finally retiring, she found time to do volunteer work with seniors and developed her talents in watercolours and other arts. She is survived by her husband of 45 years, Rick; sons: Andrew (Amanda), David and a brother in England. Eileen was predeceased by her parents: Herbert and Isobel Venables. The family would like to acknowledge the wonderful care given to Eileen during her illness by the many physicians, nurses and aides in the three hospitals, clinics, home care and finally Agape Hospice, all of whom went far beyond what was expected of them. It was truly inspirational.

A Memorial Service will be held from Pierson’s Forest Lawn Chapel, 4121 – 17 Avenue, S.E., on Friday, February 21, 2014, at 11:00 AM, with Reverend Don Fraser officiating. Rather than flowers, those desirous of doing so are asked to consider giving to a charity of their choice in Eileen’s name.