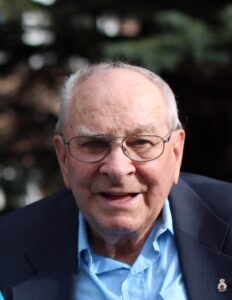 Edward Funk passed away with his loving wife by his side on Sunday, April 12, 2020 at the age of 92 years. He will be lovingly remembered by his wife, Victoria Oczkus Funk, his daughter Esther Jane Funk Hendricks and son Richard Edward Funk (Kristine Sillito) both of Calgary, Alberta. He was Grampsie to Julia (Rosler), Sarah (Sean Carter) Hendricks, Aubrey (Mike Sturko), Zack (Chelsey Johnson), Stacy (Tanner Stewart) and Dallin (McKinley Mathes) Funk. He loved welcoming his great grandchildren Austin Rosler, Gavin and Lukas Desjarlais, Joy and Katie-Lynn Watson, Adara, Ilyssa, Kaylee and Alden Schmidt, Steven Riddle, Bronson Funk and Seraphina and Genevieve Stewart. Many of the grandkidsâ€™ best memories are being out on the farm in Dewinton, watching the trains go by and eating all the raspberries they could.

Ed was the last member of his family and was predeceased by his parents Heinrich Klippenstein Funk and Margaretha Wiebe and all his siblings Diedrich Wiebe Funk, Peter Wiebe Funk, Tina Turcotte, Henry Wiebe Funk and John Abe Wiebe Funk.

Ed was born in Giroux, MB and raised near Lorrette, MB. Music was an integral part of their family life. Ed had an ear for music and taught himself to play multiple instruments by ear. He played the guitar and violin and often played and sang for the family.

Ed & Victoria met when Ed and his brothers had a band and played at local dances. Their sister, Tina, needed a companion so Vicky was asked to accompany them. The relationship evolved and they were married November 28, 1950 – they would have celebrated 70 years together this year.

Shortly after marriage, Esther was born but tragically contracted polio. They then moved to Calgary to have access to the best doctors and this is where Richard was born to complete the family.

Ed had only rudimentary formal schooling but he had a knack for learning. He was able to figure out how to rebuild all sorts of motors. Once he repaired the engine on the S.S. Moyie paddleboat at Heritage Park. While in Calgary Ed worked in a number of machine shops as a mechanic. While at work he cultivated many deep and lasting friendships which continued throughout his life. He often hosted barbecues for family and co-workers at his home in Dewinton.

Ed was a hard worker and was always busy with farm animals, gardens and fixing cars for friends and family. He was always aware of others, was often found helping those in need and would share their extra garden bounty with those who could not grow for themselves.

Ed was a strong supporter of extended family and would attend special events in his children and grandchildrenâ€™s lives. He loved to photograph and videotape the special moments and it is rare that we have pictures of him because he was always behind the camera. Ed & Vicky loved to travel and always planned their trips with visiting family in mind. Many trips were made back to Manitoba to visit family and maintain family relationships.

At Edâ€™s request, no formal funeral services will be held.