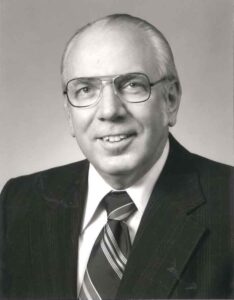 Edmund Alexander Harris, (Ed) CPA, FRPSC of Calgary, AB, passed away on April 26, 2019 at the age of 93. An Edmonton native, Ed was born April 11, 1926 to parents Fred and Hettie, one of three siblings with sisters Dora (Dee) and Phyllis. Ed grew up in the Depression and war years, nicknamed “Peanuts” by friends for his love of peanut butter. Active in Boy Scouts and Air Cadets, he interrupted his education to serve as an infantry signaller with the Seaforth Highlanders in late WWII. Afterward, Ed worked in the oil & gas industry and married Kay Dain in 1951. Children Bradley and Laurie followed shortly after. Ed later earned qualifications as a professional accountant and worked the next 30 years across Alberta and Manitoba as project coordinator and developer for Dome Petroleum and other oil & gas companies, completing several pipelines and gas plants. Ed and Kay welcomed sons Malcolm and Murray along the way. Always, Ed pursued his lifelong hobby: stamp collecting, becoming recognized internationally for his philatelic endeavours. His collections ranged across British North America themes, from classic Canadian stamps to modern, Western Canadian postal history to the covers and cancels of the Calgary Stampede. He felt most proud of his time leading the British North America Philatelic Society, of which he belonged for over 60 years. Ed was awarded the Order of the Beaver by the BNAPS in 1987 and became a Fellow of the Royal Philatelic Society of Canada in 1997. Both he and Kay enjoyed many years of travel and lifelong friendships from these associations. Ed enjoyed painting and printmaking. An avid reader and historian, he loved camping trips in the mountains around Banff and Lake Louise. Both he and Kay enjoyed many trips out to the west coast and Vancouver Island. Ed will mostly be remembered as a hardworking, loving husband of 62 years to Kay until her passing in 2014, and as a wonderful father and grandfather. Ed is pre-deceased by his sister Dee Budd and survived by sister Phyllis Ellis as well as children Brad (Liz Deeley), Laurie (Merle Woods), Malcolm (Barbara) and Murray (Corrine Fiesel), and grand-children Graham and Kathryn Woods, Colm and Cael Harris, and Lachlan and Lance Harris-Fiesel. We express our heartfelt thanks to the staff at Carewest Garrison Green for Eds care over the past 8 years. No formal funeral service will be held, rather a simple family celebration of Eds life. For those who wish, in lieu of flowers, a donation to the Alzheimer Society of Canada or the Salvation Army will be appreciated by our family.